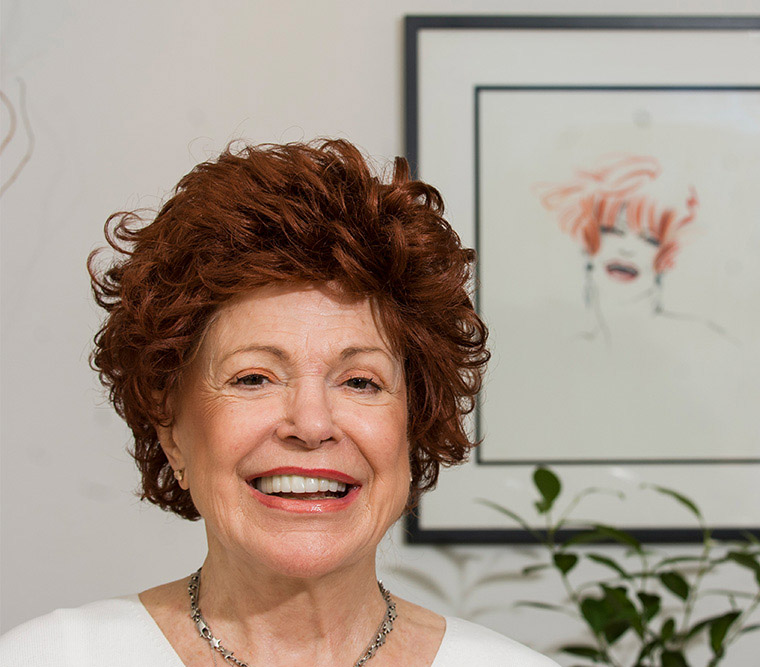 In the mid-1950s, vocalists Dave Lambert and Jon Hendricks worked together to lyricize several Count Basie tunes with the hope of recording them. They received some interest from a young producer, Creed Taylor, who was just starting out with ABC-Paramount Records, and Lambert and Hendricks auditioned 13 singers. Most of them, according to Hendricks, “couldn’t swing.” But, one of them could.

In the mid-1950s, vocalists Dave Lambert and Jon Hendricks worked together to lyricize several Count Basie tunes with the hope of recording them. They received some interest from a young producer, Creed Taylor, who was just starting out with ABC-Paramount Records, and Lambert and Hendricks auditioned 13 singers. Most of them, according to Hendricks, “couldn’t swing.” But, one of them could.

When I interviewed Hendricks in 1986, he told me, “There was one girl in the group – Annie Ross. We figured we could use Annie because she was hip enough.”  The result was the trio’s album, Sing A Song of Basie in which all the song parts were overdubbed by the three singers. It was one of the first times multitrack recording was used for a vocal album. “After the recording. We went our separate ways,” Hendricks said. “Then, one day I picked up DownBeat Magazine and found that Sing A Song of Basie was Number 13.”

That recording, wrote The Washington Post’s Matt Schudel (July 21, 2020), “became a hugely popular jazz album of the late 1950s. With daring harmonies, interweaving like birds in flight, Lambert, Hendricks and Ross created a new vocabulary for jazz singing.” Not only did LH&R break new musical ground, they pioneered in another respect as well. Hendricks was Black, Lambert and Ross were white. Although bands and even small musical groups had become racially mixed at that time, the idea of a mixed vocal group was still of doubtful acceptance. Because of the group’s instant success and wide appeal, the group’s racial daring was generally overlooked. At one point during the height of its success, the trio did a tour called Jazz for Moderns with six integrated groups.

Lambert, Hendricks and Ross’ reign at the top of the jazz world lasted five years, from 1958-1962. A half hour before a 1962 concert in Frankfurt, West Germany, Ross collapsed from exhaustion and, shortly after, left the group. According to Schudel, she had become addicted to heroin, “abetted by her relationship with the charismatic and troubled [Lenny] Bruce, who once saved Ms. Ross from a near-fatal overdose. ‘He was very special – and crazy,’ Ms. Ross said years later. ‘He would write ‘I love you’ on an airplane sick bag and mail it to me.’”

Annie Ross died July 21 at the age of 89 in her home in Manhattan from a combination of emphysema and heart disease. She was born, Annabelle Macauley Allan Short, on July 25, 1930, in Surrey, England. Her parents were Scottish vaudevillians and were on tour at the time of her birth. When she was four years old in 1935, she traveled to New York with her parents. It was a vacation but, while there, she won a radio singing contest and earned a six-month contract with MGM. Her parents then sent her to live with her aunt, Ella Logan, an actress and singer, in Los Angeles. In a 2012 documentary, No One But Me, Ross recalled that, “My aunt said to me, ‘Why don’t you become a set designer because you can’t sing – you haven’t got the magic.’

“My mum and dad wanted me to be a star,” Ross once said. “They used to call me the Scottish Shirley Temple.” In a 1994 interview with the Glasgow Herald, she added, “I was totally abandoned as a child.” In 1937, she appeared in an “Our Gang” film singing “Loch Lomond”, and, in 1943, played Judy Garland’s younger sister in the film, Presenting Lily Mars.

In 1952, she was asked by Prestige Records’ founder Bob Weinstock to try her hand at writing lyrics in the “vocalese” style, i.e., writing words for the improvised lines of an instrumental jazz solo. She selected “Twisted”, a bebop composition written by saxophonist Wardell Gray. So, she was a natural for the music eventually created by Lambert, Hendricks and Ross.

When she was only 14 years old, Ross had co-written “Let’s Fly” with Dave Ball, and it became a popular recording for Johnny Mercer and the Pied Pipers. At age 17, she moved back to Great Britain and then to Paris. She roomed in Paris with pianist/composer Mary Lou Williams and met many touring jazz musicians. Among them was drummer Kenny Clarke, with whom she had a son, Kenny Clarke, Jr. In the mid-1950s, she began splitting her time between Paris and New York.

Shortly after the forming of Lambert, Hendricks and Ross, she recorded an album with Gerry Mulligan, Annie Ross Sings a Song With Mulligan! on the World Pacific label. Bassist Bill Crow, saying farewell to Ross on Facebook, recalled that album, pointing out that, “She had begun this album (in 1957) with Gerry and Chet Baker, and Henry Grimes, and Dave Bailey. Then, Art Farmer and I joined Gerry’s quartet, and we finished the album, recording five tunes with Annie in 1958.” Reviewing the album for AllMusic, Scott Yanow pointed out that, “All the selections are quite rewarding and her interplay with baritonist Mulligan is consistently memorable.”

After leaving LH&R, Ross moved back to London and successfully kicked her drug habit. She married actor Sean Lynch in 1963, a marriage that lasted 12 years. She reunited with Hendricks occasionally in the ‘80s and ‘90s, and in 1992 had a cameo role in Robert Altman’s film, The Player. That led to a larger role, playing a vocalist, in Altman’s film, Short Cuts. Acclaim from the movie revitalized her career, and she began appearing at clubs and cabarets in New York. The New York Times’ Stephen Holden, reviewing her performance at New York’s Metropolitan Room in 2007, singled out her rendition of Gershwin’s “I Got Rhythm”, pointing out, “If you’ve got as much rhythm in your body and music in your head as Ms. Ross does at 76, who indeed could ask for anything more?”

Violinist Aaron Weinstein was invited to sit in during one of Ross’ Metropolitan Room sets 18 years ago when he was 17 years old. He posted a recollection of that experience on Facebook. Here is an abbreviated version: “I vividly remember hoping that she’d tell me what songs she wanted me to play with her . . . ‘Do you know what you’d like me to play, Ms. Ross?’ I asked. ‘It’s called being prepared,’ she said, smiling. ‘I know you are. So, you’ll be great.’”

The first tune that Weinstein played with Ross was Billy Strayhorn’s “Lush Life”, which he knew. Then, “Annie announced, ‘I’d like to do another with Aaron. It’s one I’m sure he’s never heard. But I know he’s gonna love it.’ She began singing ‘Music is Forever’, a love letter she had composed for her musician friends – people like Charlie Parker and Miles Davis. Annie was right. I’d never heard the song. As she finished singing the melody, she looked at me to take a solo, and I did my best to play intelligently. As the song ended, Annie whispered in my ear, ‘That’s the test. You passed.’ Those two sentences mean as much to me as any accolade I might ever receive in my musical life.”

Ross became a U.S. citizen in 2001 and received the National Endowment for the Arts Jazz Master award in 2010. She is survived by her partner of more than 30 years, David Usher; her sister, Heather Logan; her nephew, Domenick Allen; and her goddaughter, Charlotte Allan. Her son, Kenny Clarke, Jr., died in 2018.

Morris Museum ‘Jazz On the Back Deck’