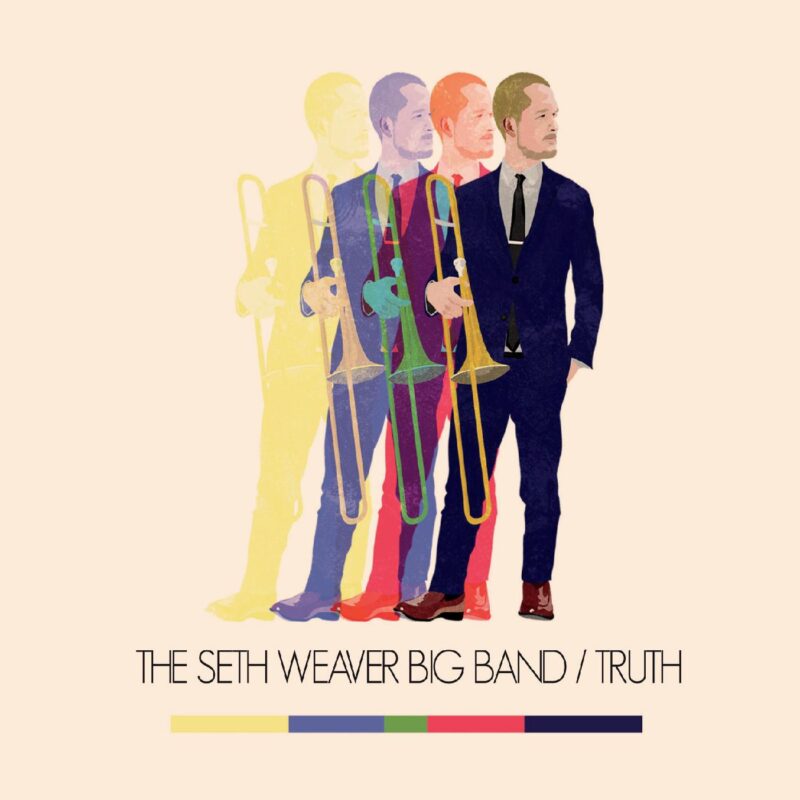 Continued from the July/August 2020 issue of Jersey Jazz Magazine

Continued from the July/August 2020 issue of Jersey Jazz Magazine

Truth (Outside in Music – 2014) is the debut recording by THE SETH WEAVER BIG BAND, and a fine debut it is.  Leader/trombonist Weaver presents an eight-song program that includes five original pieces plus “Here’s That Rainy Day,” “On a Clear Day” and “It Could Happen to You.”  Weaver adds nicely phrased vocals on three tracks, “Rainy Day,” “Clear Day” and his own “What If.”  The band is staffed with an impressive collection of young New York City-based jazzers who execute Weaver’s well-conceived charts with precision and a consistent swing.  There are terrific solo interludes by saxophonists Lukas Gabric and Sam Dillon, pianist Addison Frei, and Weaver on trombone.  It is good to know that there are still young musicians willing to dip their toes into the wonderful world of big band jazz.  (www.sethweavermusic.com)

For several years, the J.C. HOPKINS BIGGISH BAND has been a Saturday night fixture at Minton’s Playhouse in Harlem where it performs a mixture of classic tunes and impressive originals.  Its new release, New York Moment (Twee-Jazz Records – 001) is an 11-track swinger containing 10 Hopkins originals plus “Better Git It in Your Soul,” a jazz standard by Charles Mingus.  Hopkins, who plays piano, has been leading his band since he moved to Brooklyn from San Francisco in 2000. Among the vocalists who have been in the band are Norah Jones, Madeleine Peyroux, and Brianna Thomas, all of whom have gone on to great success.  Hopkins has a talent for writing new songs that would have been right at home during the Swing Era. The nine-piece ensemble sounds like a larger group thanks to the charts by tenor saxophonist Drew Vandewinckle.  There are five vocalists featured on the album, each of them adding their distinctive and appealing stylings to the mix. One listen to this collection will let you know why Hopkins has kept this aggregation alive for 20 years.  (www.jchopkins.com)

BRIAN LANDRUS specializes in playing low woodwinds.  On For Now (BlueLand – 2020), he plays baritone sax, bass clarinet, and alto flute to great effect.  On this project he is joined by pianist Fred Hersch, bassist Drew Gress, and drummer Billy Hart.  Trumpeter Michael Rodriguez appears on five tracks, while a string quartet is present for six of the 13 selections.  The program included 10 Landrus originals plus “Invitation” and two Thelonious Monk tunes, a stunning bass clarinet solo take on “‘Round Midnight,” and a beautifully sensitive baritone sax/piano duo with Hersch on “Ruby, My Dear.”  Landrus’ original material is eclectic and immediately welcoming.  He has produced an album that touches many emotions and never wavers in saying ‘listen to me.’  (brianlandrus.com)

Sam Jones was among the most in demand bassists on the New York City scene from the late 1950s though the 1970s, playing with a Who’s Who of jazz greats from those years.  In addition to his playing, he was also recognized as a fine composer of jazz tunes.  A taste of his powers as a composer can be found on the splendid new recording by THE TNEK JAZZ QUINTET, Plays the Music of Sam Jones (Self-produced).  The group includes bassist Kent Miller, who had the idea to record the music of Jones, pianist Darius Scott, drummer Greg Holloway, and saxophonists Benny Russell and Antonio Parker, all from the Washington, D.C. area.  Miller made a wise choice to address this music for it is consistently engaging, melodic, swinging and accessible. The six selections by Jones are supplemented by one Kenny Barron tune, “Tragic Magic,” that fits easily into the Jones program.  This is straight ahead jazz that should appeal to a wide audience.  (amazon.com.)

When she received much acclaim for her 1988 performance in the Paris staging of Cabaret, including some comparisons to Marlene Dietrich, German actress/singer UTE LEMPER felt embarrassed by this, and wrote a note to Dietrich apologizing for the comparison.  She received a phone call from Dietrich in return, and during their lengthy conversation, Dietrich recalled much of what had occurred in her life.  It was an occasion of great significance for Lemper.  A few years ago, Lemper created Rendezvous With Marlene (Jazzhaus – 184). This show, originally done as a cabaret performance, provided an overview of Dietrich’s life and career, with Lemper performing 20 songs associated with Dietrich.  I saw the show at the York Theater last year and greatly enjoyed it.  Lemper does an effective job of capturing the Dietrich persona, but also brings much of her own performing personality to the production.  She is an accomplished actress and singer, who moves easily between being herself and channeling Dietrich.  The recording contains only the musical portion of the show, but stands nicely on its own.  (utelemper.com)

Bassist Jerry Bruno: ‘Bucky and Me Were Like Melted Together’