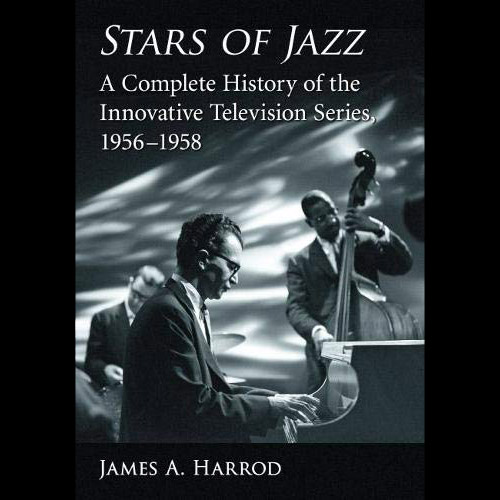 James A. Harrod’s STARS OF JAZZ

Stars of Jazz was a weekly television show originally seen in Los Angeles, but it eventually had a 29-show national run before reverting to being a local show for its final few episodes.

James A. Harrod’s STARS OF JAZZ:
A Complete History of the Innovative TV Series, 1956-1958

Stars of Jazz was a weekly television show originally seen in Los Angeles, but it eventually had a 29-show national run before reverting to being a local show for its final few episodes.  The half-hour program, which featured both instrumentalists and vocalists, mostly from the greater Los Angeles area, was hosted by singer/songwriter/jazz pianist/actor Bobby Troup.  James A. Harrod has authored Stars of Jazz: A Complete History of the Innovative Television Series, 1956-1958, a highly readable, well-organized and informative book that covers the story of this important history of jazz presented on television.

Harrod takes the reader through the evolution of the show from how it was conceived by a group of people from KABC-TV in Los Angeles to the selection of Troup as the host to an episode- by-episode review of the series.

While the main emphasis on Stars of Jazz was the music, the creative staff decided that, on each episode, they would have a script that emphasized some aspect of jazz associated with the guests appearing on the show.  In addition, Troup spent time briefly interviewing some of the participants. There was generally an instrumental group, primarily practitioners of what came to be known as West Coast Jazz or one of the traditional jazz groups who were popular in Southern California during the period. There were occasional contributions from groups from outside the Los Angeles area who were performing in local jazz clubs. Most of the programs also featured a vocalist.  Some, like June Christy, Anita O’Day, Julie London, and Jeri Southern, were well known, established singers, while others were more obscure vocalists who it was felt were worthy of the exposure that they would receive from their appearances.

As he discusses each installment, Harrod provides a lot of supplemental information about the performers and the music being presented, adding some historical perspective to the proceedings.  Two aspects of the show that made it unique were the creative camerawork and the use of special effects to augment the visual aspect of the shows.

Included as the first chapter of the book is a 1992 interview with Ray Avery who owned record stores in Los Angeles and also became a well-respected jazz photographer. Avery took photographs at most of the Stars of Jazz shows, usually during the rehearsals when he could get shots without being concerned with blocking the cameras.  Most of the many photographs used in the book are by Avery.

There were 130 shows in the series.  They were filmed as kinescopes.  Eventually the executives at KABC decided that the kinescopes could be trashed.  Jimmie Baker, who served as the lead producer for the series, became aware of these plans, and was able to salvage 45 of them. They now reside at the UCLA Film & Television archive.  Sixteen of the shows have been restored, while the rest are in the collection at UCLA.  A few of the programs were available on VHS tapes, and there are several segments available for viewing on YouTube.  Harrod provides the URL info for the YouTube videos.  Baker also saved all but seven of the production scripts, and they are now part of the collection at the Los Angeles Jazz Institute.  There were also professional audio recordings of most of the shows, some of which were briefly made available on a series of LPs, but the disposition of the tapes is a somewhat complicated story that Harrod relates in the book.

Harrod has done a superb job of using the available resources to present a complete picture of the genesis and production of this important televised jazz series. By the time that you finish reading this book, you will have learned about this significant slice of jazz history and will feel sad that you cannot see all of the shows. But, you will surely head to YouTube to enjoy what is currently available.