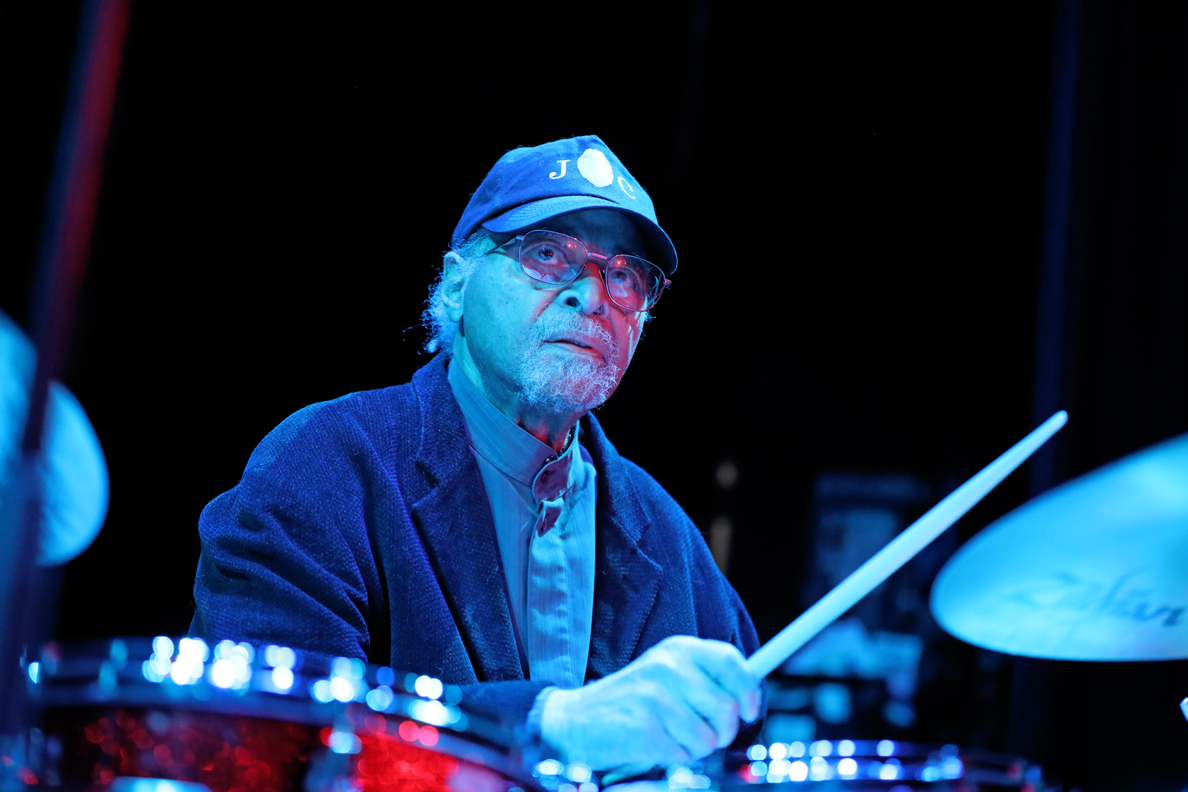 When the Miles Davis Septet was beginning to record the now-classic album, Kind of Blue (Columbia: 1959), Davis reportedly said to drummer Jimmy Cobb, “Jimmy, you know what to do. Just make it sound like it’s floating.” And, according to National Public Radio’s Natalie Weiner (May 25, 2020), “It does: The perfect tension between Cobb’s signature driving cymbal beat and Paul Chambers’ relaxed walking bass line makes most people’s first jazz album one that you can — or can’t help but — move to.”

Jimmy Cobb, the last surviving member of that septet, died at the age of 91 on May 24, 2020, at his home in Manhattan. The cause, according to his wife, Eleana Tee Cobb, was lung cancer.  Born on January 20, 1929, in Washington, D.C., Cobb was already playing on the jazz circuit as a teenager.  He performed with Billie Holiday in D.C. and on the road with Davis and Charlie Parker.

His last album was Jimmy Cobb: This I Dig of You, released in 2019 on the Smoke Sessions label. In his review in JazzTimes, Philip Booth declared, “At 90, Cobb still has it, as he handily demonstrates . . . driving a quartet on an uncluttered frills-free program dominated by standards, some of which he’s been playing for decades.” The pianist on that recording was Harold Mabern, who died in September 2019. In November, Cobb played with a septet at the Giants of Jazz concert honoring Mabern at the South Orange Performing Arts Center. That septet played “Mr. Johnson”, a Mabern composition in memory of trombonist J.J. Johnson (Jersey Jazz, January-February 2020). On This I Dig of You, Cobb and Mabern, along with guitarist Peter Bernstein and bassist John Webber, played Mabern’s ode to trumpeter Lee Morgan, “Edward Lee”.

Cobb’s strength, Weiner wrote, “was always understatement, which meant that he didn’t necessarily get the same accolades and attention as some of his peers behind the kit. But his simplicity and intuitive feel made Cobb’s grooves a seamless art of any band’s living organism, its backbone or heartbeat.”

In addition to Kind of Blue, Cobb appeared on such other well-known Davis albums as Sketches of Spain (Columbia: 1960) and In Person Friday and Saturday Nights at the Blackhawk (originally recorded in 1961; reissued as a four-disc set by Sony Distribution in 2003).

Early in his career, Cobb played with saxophonist Earl Bostic, vocalist Dinah Washington, and pianist Wynton Kelly. He and Kelly collaborated for 20 years, including on two Miles Davis recordings. He also played on some of Cannonball Adderley’s early recordings, but he didn’t record as a leader until 1980.

In the ’90s, Cobb became a mentor to young jazz musicians such as the late trumpeter Roy Hargrove, bassist Christian McBride, pianist Brad Meldau, and guitarist Peter Bernstein. “Jimmy Cobb,” Meldau posted on Facebook, “was one of a handful of drummers who changed the music indelibly. The inimitable swing feel we know and love so much from him — particularly as regards his own way of what many call ‘tipping’ — was simply not there until he gave it to us. His musicality and subtlety were unmatched. The joy he has given me as a listener for decades and playing with him for a short while is a treasure I hold in my heart.”

Added Bernstein, also on Facebook: “There are no words to describe what it felt like to play with him . . . There could not be a more unselfish musician than Jimmy Cobb. He played for the music, for the other musicians he was playing with. His touch and sound on the drums made the other instruments sound better. His sound carried you, and his momentum was so beautiful. He was a genius of forward motion. He was a true zen master.”

Cobb was named a National Endowment for the Arts Jazz Master in 2009. In a 2008 interview with the NEA, he described how he established his sound: “Most people, when you start out, you start out emulating somebody. Do what they do. You’d heard something that sounded good and you liked it, you’d try to play that. You did that for a while; some people get out of it, and some people don’t . . . After a while, that kind of gives you a style, because you take different things from different people’s playing that you like, and then you put it together for your stuff, and then you probably wind up in the long run with some kind of a style of your own.”

In addition to his wife, Cobb is survived by two daughters, Serena and Jaime.