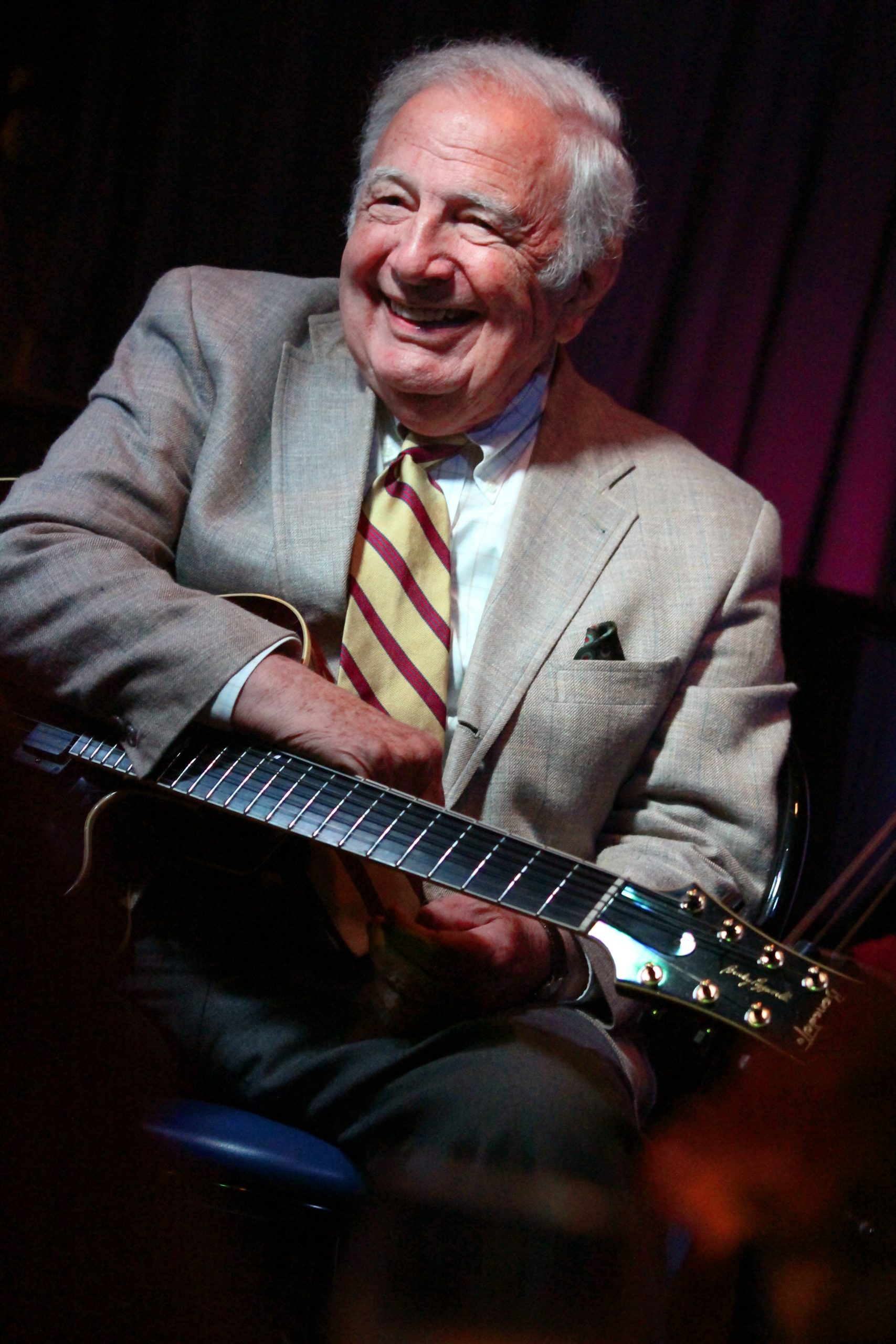 ‘ There Is Only One Bucky ‘

In 1969, Oscar Peterson released an album called Motions and Emotions on the MPS Records label. One of the tracks was the Antonio Carlos Jobim tune, “Wave”, and the writer Gene Lees sought to find out who the guitarist was.

In 1969, Oscar Peterson released an album called Motions and Emotions on the MPS Records label. One of the tracks was the Antonio Carlos Jobim tune, “Wave”, and the writer Gene Lees sought to find out who the guitarist was.

He reported on his search in the July 1, 1999, issue of JazzTimes. “The chart is marvelous,” he wrote, “and so is Oscar’s performance. But I was particularly struck by the rhythm section guitar work. I listened, trying to figure out who the player was and concluded that it had to be Brazilian, such was the authenticity of it. Not many Americans at that time could really play that way. Later I said to [the arranger] Claus Ogerman, ‘Who played guitar on that track?’ ‘Bucky’, Claus said. It was unnecessary to add a surname: There is only one Bucky.”

Bucky Pizzarelli died at his home in Upper Saddle River, NJ, Tuesday, March 31, at the age of 94. Two days earlier, according to his daughter, Mary Pizzarelli, he had tested positive for the coronavirus.

After suffering a stroke, pneumonia, and several hospitalizations in 2015 and 2016, it appeared that Pizzarelli’s career was over. But he made a triumphant comeback in 2017. The Chicago Tribune‘s Howard Reich, reviewing his June 2017 performance at the Jazz Showcase, wrote of Pizzarelli’s “disarmingly straightforward approach to melodic line. Even at his exalted age, Pizzarelli brought considerable craft to his solos, dispatching practically every note with heightened care.”

In October 2017, the New Jersey Jazz Society saluted Pizzarelli’s seven-decade career at NJJS’ 45th anniversary concert. As reported in the December 2017 issue of Jersey Jazz, the concert kicked off  “with a silky smooth ‘Stompin’ at the Savoy’ with Bucky in the leader’s chair . . . The man of the hour, Bucky Pizzarelli, was resplendent in his trademark blazer and rep tie, flashing that ever ready smile, guitar in hand.” Pizzarelli was a favorite among NJJS members and fans, having played countless Jazz Society events going back to the 1970s.

Born in Paterson, NJ, on January 9, 1926, Pizzarelli learned to play banjo and guitar at an early age and, at 17, was on the road with vocalist Vaughn Monroe’s band. His first musical hero was a blind accordionist/organist named Joe Mooney whom he would play with in Paterson. In a January 2008 Jersey Jazz interview with Schaen Fox, Pizzarelli said he learned about the potential Vaughn Monroe gig because of his relationship with Mooney.

“On Sunday afternoons in Paterson,” he said, “we were allowed to go to the Hollywood Brick Bar downstairs on Market and Main Street. Joe Mooney was there, and one of my uncles was playing guitar with him . . . Frank Ryerson, who was first trumpet player with Vaughn Monroe, was looking for a guitar player to join the band. So, he said to me, are you the kid who played with Joe Mooney down in Paterson?’ I said, ‘Yeah’. He said, ‘OK,’ and that was the requirement. I jumped on the bus and went to Scranton, PA, and Vaughn asked me to stay with the band ’til I went into the Army, which was about four months later.”

After being released from the Army in 1946, Pizzarelli reunited with Monroe before leaving to join the NBC staff orchestra. He also played with the Three Suns, free-lanced, and toured with Benny Goodman. Pizzarelli was one of the few musicians able to maintain a positive rapport with the difficult Goodman over several years. Asked about that by Fox, he explained that, “Benny could pick a wise guy out before he even walked into the room . . . If you tried to outsmart him, you couldn’t do it . . . I knew what he wanted: With Benny, you had to know what tempo he was doing. That’s all. When he played by himself, there was the tempo before you started playing. If you interpreted that the wrong way, you were out.” 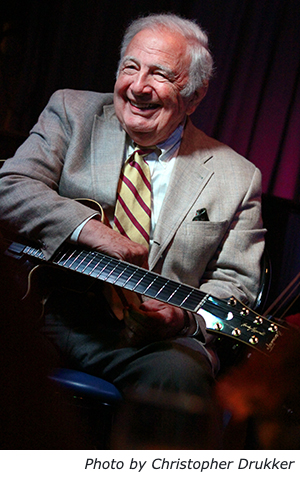 Pizzarelli switched from a six-string to a seven-string guitar when he started playing with fellow guitarist George Barnes in 1970 after Barnes’ previous partner, Carl Kress, died. “I was lucky to team up with George Barnes when I first got that seven-string Gretsch,” Pizzarelli told JazzTimes’ Lees. “That’s how I got to learn to play that thing.” Reviewing one of Pizzarelli’s and Barnes’ first performances together, John S. Wilson of The New York Times called them “a brilliant and unique team. Mr. Barnes and Mr. Pizzarelli can be dazzling, and they can be sensuously brooding. They sparkle with excitement, leap with joy, or relax with a warm romantic glow.”

After parting ways with Barnes in 1972, Pizzarelli embarked on a busy recording and performing career, playing solo and appearing with saxophonists Bud Freeman and Zoot Sims and violinists Stephane Grappelli and Joe Venuti, among others.

He played at the White House three times — for Presidents Nixon, Reagan, and Clinton. The Reagan performance was with Benny Goodman’s quintet, which also included Hank Jones on piano, Milt Hinton on bass, and Buddy Rich on drums. “Buddy” Pizzarelli told Fox, “respected Benny like you can’t believe, and when Benny called him to come and play, he was excited and dropped everything. We went down to Washington and stayed at the Watergate. When we played, he even played ‘Sing, Sing, Sing’ the way Gene Krupa did it. I have a tape of that. It is very exciting.”

Zoot Sims, Pizzarelli said, was Clinton’s favorite sax player. He was also Pizzarelli’s. “To me,” he told Fox, “there was nobody like Zoot. He was the happiest guy whenever he had that saxophone. Nobody could beat him. He and Al Cohn together, they were the champs. Two champs.” In 1998, Pizzarelli and tenor saxophonist Scott Hamilton released a duo album on the Concord Jazz label called Red Door, a tribute to Sims. Calling the album, “a very successful outing,” AllMusic‘s Scott Yanow wrote that, “Pizzarelli’s mastery of the seven-string guitar allows him to play bass lines behind solos, so one never misses the other instruments . .  . Both Hamilton and Pizzarelli sound inspired in this format, stretching themselves while always swinging.”

In 1980, Pizzarelli began performing in duos with his son, John, then 20, who has gone on to a very successful career as a guitarist and vocalist. The day after Bucky Pizzarelli’s death, John Pizzarelli described his father to the Morristown Daily Record‘s William Westhoven as “the ultimate sideman. He wasn’t looking to be the guy out in front of the band. He was happy to be inside the band, supporting the whole organization. There will be some kind of tribute,” he added, “as soon as we can all get within six feet of each other.” Bucky and John Pizzarelli have recorded albums together on the Arbors Records label, including The Pizzarellis, Bucky and John: Contrast and Bucky and John Pizzarelli: Family Fugue.

“Jazz guitar wouldn’t be what it is today without Bucky Pizzarelli,” guitarist Frank Vignola told the Daily Record‘s Westhoven. “He and Freddie Greene were responsible for a style of rhythm guitar playing that has lasted until 2020.” Vignola was often Pizzarelli’s partner in multi-guitar summits at the annual Morristown Jazz and Blues festivals held in August. “He was an inspiration on so many levels,” Vignola said. “When I first met him, I had four young kids, and he was a father. He showed me that, yes, you can be a jazz guitar player and raise a family. That may not seem like a big deal, but it was huge to me.”

In addition to John and Mary, Pizzarelli is survived by his wife, Ruth; son, bassist Martin Pizzarelli; daughter, Anne Hymes; and four grandchilden. John’s wife is the vocalist Jessica Molaskey.

Wallace Roney, a Protege of Miles Davis, Dies from COVID-19