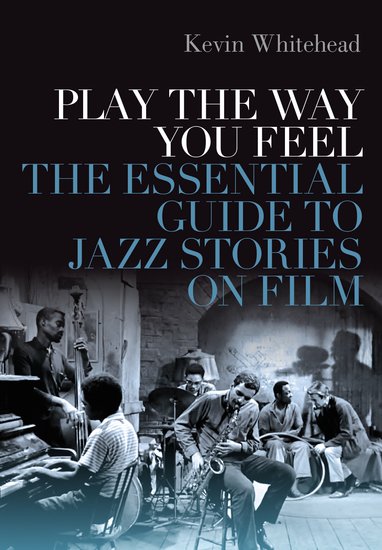 There are three ways in which jazz is connected to film. Jazz is sometimes used for scoring films or for musical interludes in films that are not centered on jazz in the story. Quite a few documentaries about the music or specific performers have been released.

There are three ways in which jazz is connected to film.  Jazz is sometimes used for scoring films or for musical interludes in films that are not centered on jazz in the story.  Quite a few documentaries about the music or specific performers have been released. The other connection is the one that is the focus of Play the Way You Feel: The Essential Guide to Jazz Stories on Film, films that have some aspect of the world of jazz as a major element of the screenplay.

Kevin Whitehead has written an impressive volume that covers films from the first talkie, The Jazz Singer with Al Jolson, to the 2019 film, Bolden.  There is a lot of territory covered in between. In most cases, Whitehead gives a detailed look at the plot of the films and evaluates it from the perspective of how closely it relates to the realities of the jazz world and the documented history of the music.

Many readers will have seen several of the films referenced, but only very few will be familiar with all or even most of them.  Reading about the details of an unfamiliar film is sometimes an incentive to seek out the film for viewing but can also be a bit tedious when the film is not one that sounds appealing.

Whitehead has a breadth of knowledge about jazz history, and that gives him a strong place from which to judge the films. He is not a movie critic but has enough sensitivity to the art form to make intelligent judgments about various performances.

This is not a book that is a sit-down-and-read-straight-through kind of volume. Some parts will interest the reader more than others.  There are readers who will skim to get the essence of a film without digging into the details.

Yes, most readers will be aware of films such as Birth of the Blues, Young Man with a Horn, The Glenn Miller Story, Round Midnight, Bird, Sweet and Low Down and La La Land, but there are sure to be films covered that you have never been aware even exist.  Opening these new doors is one of the pleasures to be found in reading this book. This is especially true of some smaller independent films, and made for television movies.  You might be among the few who remember a television series called Johnny Staccato, starring John Cassavetes as a ex-jazz playing detective, but, if not, Whitehead’s words could lead you to grab a copy of the reasonably priced DVD set and enter the world of mystery and music that it contains.

It is interesting to compare Whitehead’s perspectives with your own regarding films that you have seen.  You will sometimes find yourselves agreeing with him, but not always. There are times when you will be inspired to revisit or view films for the first time by what he has written.

Whitehead has undertaken a project that deserves the effort that he has put forth.  The final product is a richly rewarding book that will provide countless hours of discovery and entertainment for anyone who digs into it.