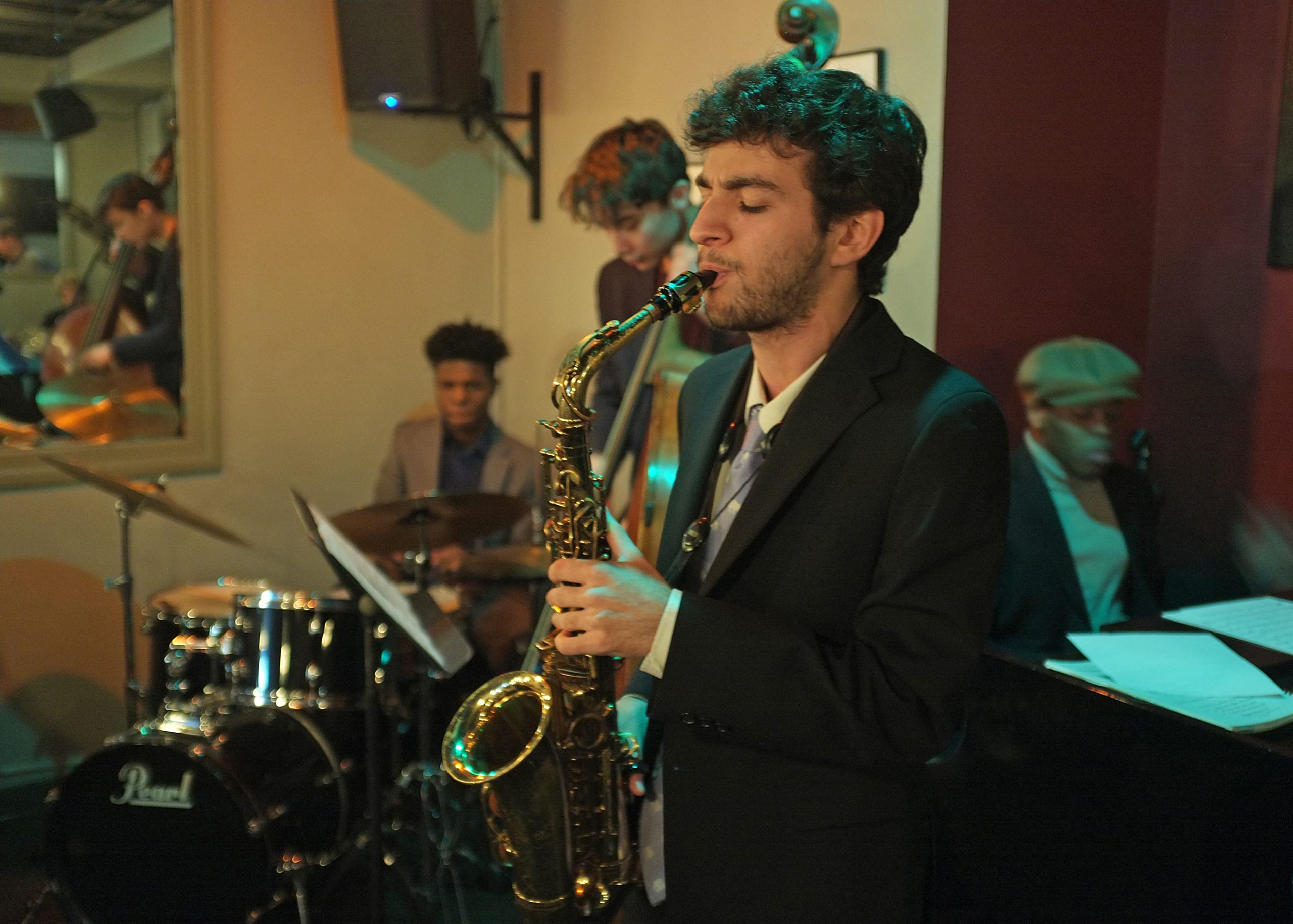 Alto saxophonist Alex Laurenzi is a senior at Princeton University, majoring in African-American History, and he plans to write his senior thesis on jazz musicians who were active in the civil rights movement of the late ’50s and early ’60s. So, at the NJJS Jazz Social on Sunday, February 16, at Shanghai Jazz in Madison, Laurenzi decided to dedicate his performance to some of those jazz artists: bassist Charles Mingus, drummer Max Roach, and vocalist Nina Simone.

He led off with Clifford Brown’s “Daahoud”, featured on the 1954 EmArcy album, Clifford Brown/Max Roach Quintet. That was followed by Mingus’ “All The Things You C#” based on the Jerome Kern classic “All The Things You Are”. The first set also included an emotional, show stopping performance of Gershwin’s “I Loves You Porgy”, recorded by Simone in 1959 on her debut album, Little Girl Blue (Bethlehem Records); and Duke Ellington’s “Sound of Love”, the title tune of a 1999 Mingus album on the Memo Music label. “I love ballads,” Laurenzi acknowledged to the packed room, pointing out that “Sound of Love” was, “a tribute by Mingus to Ellington, whom he considered one of his mentors.”

Laurenzi is a force to be reckoned with on alto saxophone. His musical hero is alto saxophonist Bruce Williams, but there are touches of everyone from David Sanborn to Johnny Hodges in his soulful, passionate playing. He was accompanied at the Social by a trio of Juilliard Jazz students — pianist Isaiah Thompson, bassist Felix Moseholm, and drummer T.J. Reddick. In an understatement, NJJS President Cydney Halpin remarked that, “It’s clear that jazz is in good hands.” Laurenzi and Thompson, who was a guest performer on the Jazz at Lincoln Center Orchestra’s Blue Engine Records album, Handful of Keys, have worked together before. But it was the alto saxophonist’s first time playing with Moseholm, who studied under Ron Carter, and Reddick, a member of Wynton Marsalis’ Future of Jazz Orchestra. They should take this quartet out on the road.

In the second set, Laurenzi paid tribute to the late tenor saxophonist Jimmy Heath with two Heath compositions: “One For Juan” (dedicated to fictional Colombian coffee farmer Juan Valdez) and “C.T.A.”, recorded by Heath with Miles Davis in 1953. He also played another tune associated with Mingus, Sy Johnson’s “For Harry Carney”, and recognized “one of the most underrated pianists of the ’60s, Andrew Hill. We play a lot of his music at Princeton.” The quartet then performed Hill’s “Black Fire”, the title track of his debut album on Blue Note Records in 1964.

It’s clear that Laurenzi, a modern jazz performer, has a healthy respect and admiration for the jazz legends who preceded him. It should serve him well in what is undoubtedly a bright musical future. –SJ