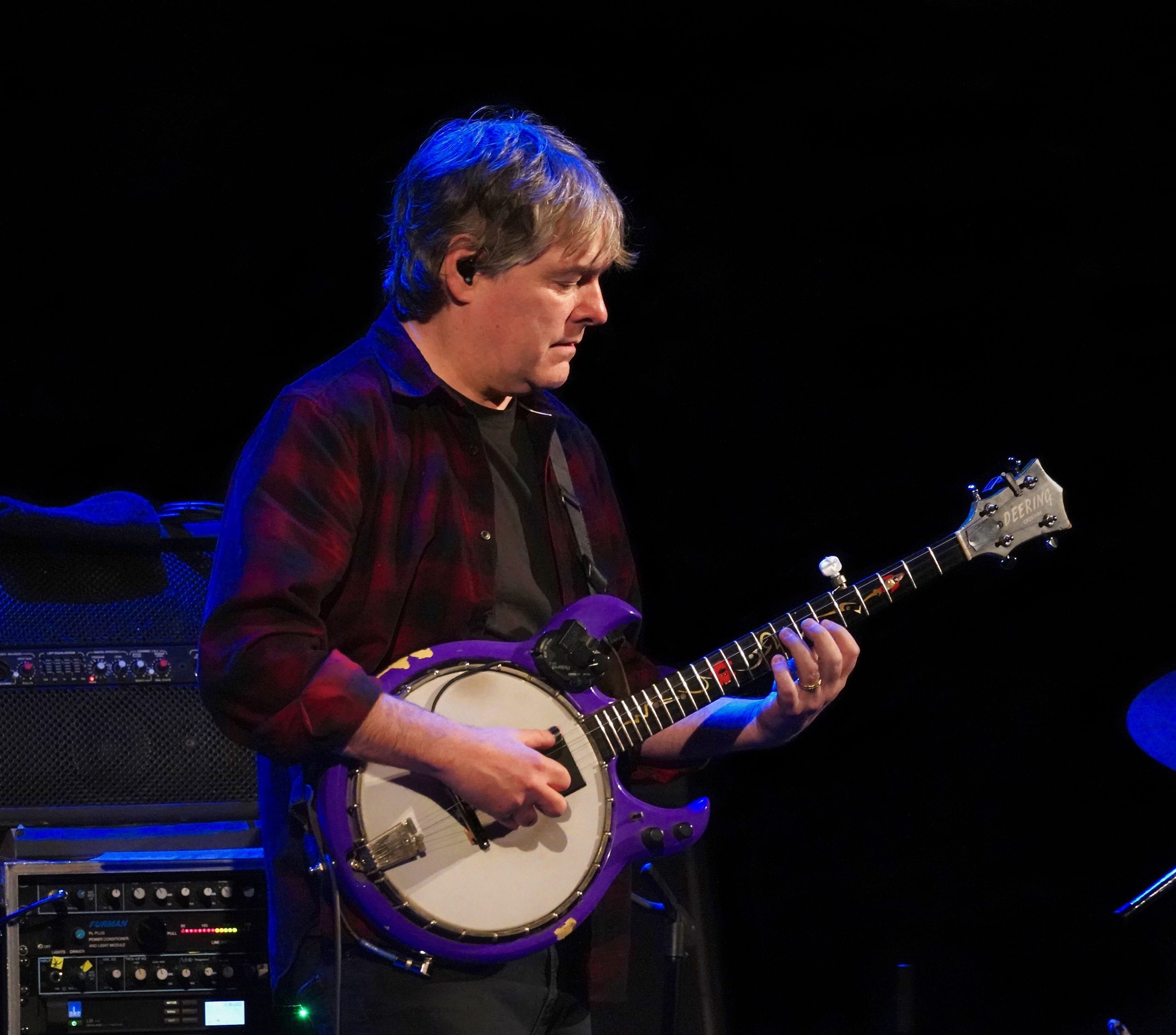 Known for its unclassifiable mix of bluegrass, jazz, rock, classical, funk, and world music in a style sometimes referred to as “blu-bop,” Béla Fleck and the Flecktones is the Grammy-winning musical group created by the world-class banjo player, Béla Fleck.

Known for its unclassifiable mix of bluegrass, jazz, rock, classical, funk, and world music in a style sometimes referred to as “blu-bop,” Béla Fleck and the Flecktones is the Grammy-winning musical group created by the world-class banjo player, Béla Fleck.

Born in New York City, the 61-year-old Fleck was named after the Hungarian composer Béla Bartok. He was drawn to the banjo as a child after hearing Earl Scruggs play the The Beverly Hillbillies theme song on television and hearing “Dueling Banjos” by Eric Weissberg on the radio.

Years later, when Fleck was invited to perform on a PBS television special, he assembled a group featuring Victor Wooten on bass guitar; Roy “Future Man” Wooten on the “Drumitar,” a unique handheld percussion instrument he invented himself; and Howard Levy on harmonica and keyboards.

In 1992, Levy left the band, but the group continued to record and tour as a trio, winning a 1997 Grammy for Best Pop Instrumental Performance for their song, “Sinister Minister.” They received another Grammy for 2000’s Outbound, which featured new member Jeff Coffin on saxophone, in addition to guest vocal performances by singer/songwriter Shawn Colvin and Jon Anderson of Yes. Coffin also performed on the group’s holiday album, Jingle All the Way. In 2011, when Coffin left The Flecktones to join The Dave Matthews Band, Levy returned to the fold and the band recorded their most recent studio album, Rocket Science.

It was the original group of musicians on this recording which celebrated the 30th anniversary of the founding of Béla Fleck and the Flecktones on the band’s tour stop at New Brunswick’s State Theatre New Jersey on December 6, 2019.

Opening with a number from their debut album, Béla Fleck and the Flecktones, Levy began the space-age sounding intro to “Frontiers” playing on his twangy jaw harp. Fleck entered picking his country-sounding banjo while Levy switched over to harmonica before going over to the piano where he alternated playing both instruments. As the music continued to percolate, Future Man played the drums with one hand while playing the Drumitar with the other, and his brother, Victor, grounded this rhythmic country-bop tune with a solid bass line. Under flashing rays of light, the arrangement became more bluesy and funky, alternating with a country flair bringing enthusiastic cheers from the audience.

Next up was a number from Flight of the Cosmic Hippo, the uptempo, “Blu Bop.” On this countrified bebop tune, Fleck started out on the banjo before Wooten’s bass and Levy’s grand piano added their voices. After that was “Sex in a Pan,” a funk number which opened with Wooten playing with both of his hands placed closely together on the bass fretboard, bending the strings with tenderness and speed. Coaxing out the most incredible sounds from his electric bass, Wooten incorporated Tchaikovsky’s “Dance of the Sugar Plum Fairy” into his solo, eliciting giggles of delight from the crowd.

“Life in Eleven,” from Rocket Science, started with Levy on harmonica incorporating snippets of “Oh, What a Beautiful Morning,” “If I Only Had a Brain,” “Let it Snow,” “White Christmas,” and Bach’s “Jesu Joy of Man’s Desiring” into his performance. First, Wooten and Levy played to each other Then, Fleck and Future Man played to one another, each musician’s part integral to the whole.

Announcing, “We’re going to go back to the first record we recorded in 1989,” Fleck introduced “Half Moon Bay.” Opening with piano on this swinging jazz number, banjo, bass, and percussion soon joined in. Levy played grand piano with one hand and harmonica with the other prior to impressing the crowd with a nifty harmonica solo. Fleck followed with an inspired banjo solo before the musicians went round and round on the tune’s circular melody, each sharing the gift of music with one another and the audience. Another tune from Rocket Science, “Sweet Pomegranates,” followed.

After a short intermission, the band returned with a holiday-inspired number — a unique jazz-funk rendition of “Silent Night” in 5/4 time. Wooten opened by laying down the groove with his bass, and Levy channeled Toots Thielemans on his harmonica as he handled the melody while Fleck fingerpicked on the banjo and Future Man accented the rhythm on his Drumitar. Turning this Christmas classic upside down, each musician put his own spin on the tune before Levy attempted to slow things down, Future Man was highlighted on percussion, and the arrangement ended in unresolved fashion at which point the band segued into an uptempo Earl Scruggs-style bluegrass version of “Sleigh Ride.”

Fleck announced that the band was going to play “The Twelve Days of Christmas”, pointing out that each day would be “in a different key and in a different time signature.” After asking the audience, “What key should we start in?” a fan yelled out, “E flat.” Fleck and the band performed an arrangement of the song in which they not only shifted key and time signatures as they played, but tempos as well.

As the challenging arrangement continued, Fleck held up two, three, four, and more fingers to indicate what meter the group happened to be playing, making the audience laugh out loud as he stuck out his tongue when he ran out of fingers on the 11th day of Christmas. The audience rewarded the band with a standing ovation for this clever and amazing performance.

The group followed up with “Sunset Road,” a lovely tune from its debut album. Fleck’s turn in the spotlight echoed that of a classical recital. The audience sat in rapt attention on his stunning rubato performance which included a snippet of “Jingle Bells” played in a minor key before he quickly shifted into a bluegrass style. Ultimately, the entire band joined in as the song became an R&B shuffle, and the audience was compelled to clap along to the irresistible groove.

Future Man was featured on lead vocals. After singing, “I stand alone/This is my life/No one to hold/No compromise,” Fleck gave him a thumbs up. Levy followed up with a chordal solo, his hands flipping right over left, as he was expertly accompanied on bass and banjo. Then, Fleck divided the audience into three sections and had each section clap on a different beat as he played the banjo. “You guys are good!” exclaimed Fleck at the conclusion. “Thank you for being here. We’ve been playing this music for 30 years, and some of you have been listening for 30 years!”

Explaining how, upon missing the birth of his son, he wrote the group’s next song “in the airport trying to get home,” Fleck and Company launched into its final number of the evening,

“Juno.” On this happy-go-lucky country/jazz composition, each musician performed a tour-de-force solo after repeating the number’s catchy melodic motif.

For its encore, the group launched into its Grammy-winning “The Sinister Minister.”  When it was over, the crowd leapt to its feet one last time as band members tossed small stuffed hippos into the audience, bowing one last time to excited cheers before exiting.