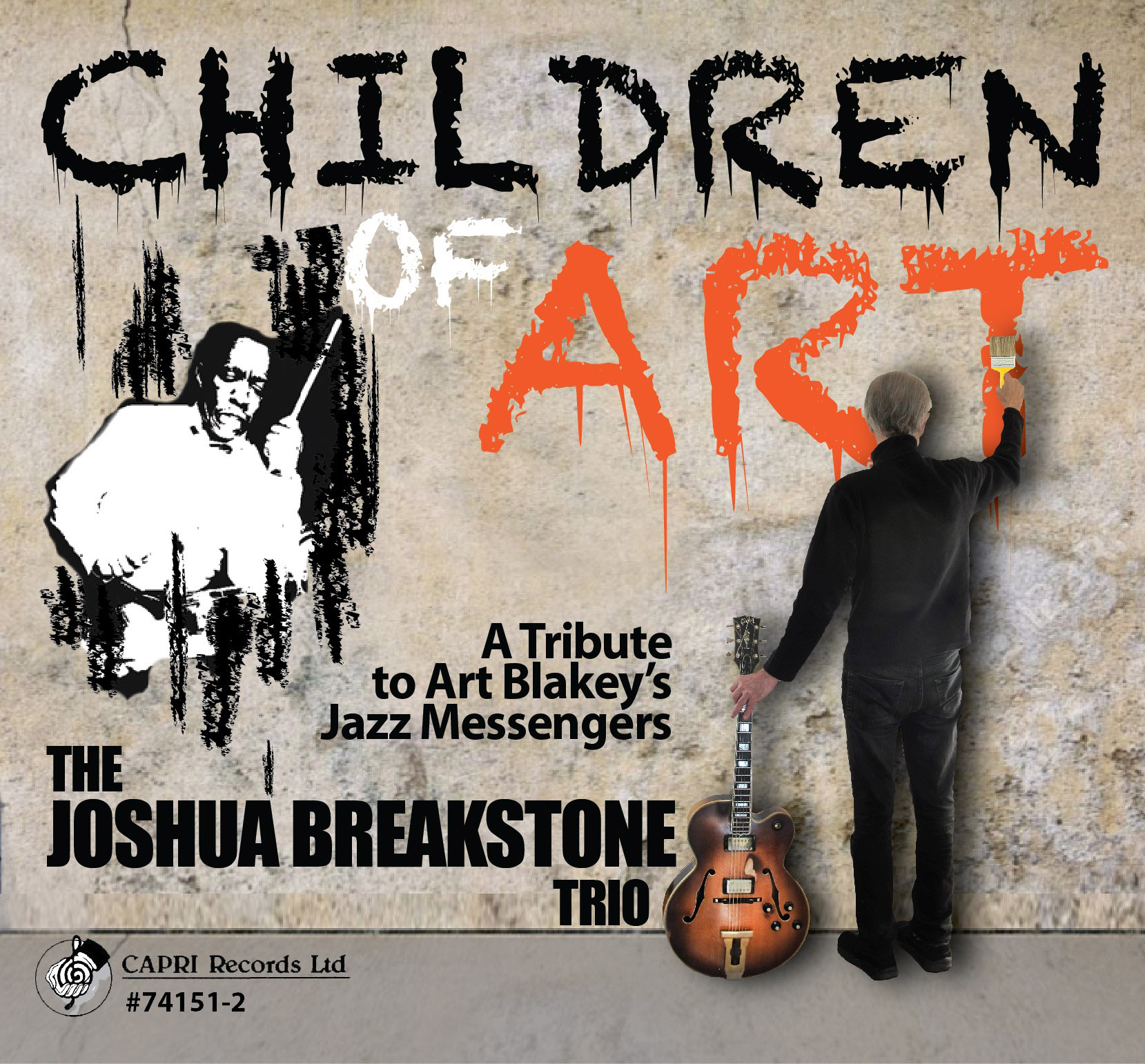 (Continued from the January-February issue of Jersey Jazz)

Art Blakey was a mentor and inspiration for many jazz players who played in the Jazz
Messengers and then went on to individual prominence — players such as Lee Morgan,
Wayne Shorter, Benny Golson, Horace Silver, Walter Davis Jr., Cedar Walton, and Hank
Mobley.

(Continued from the January-February issue of Jersey Jazz)

Art Blakey was a mentor and inspiration for many jazz players who played in the Jazz Messengers and then went on to individual prominence — players such as Lee Morgan,Wayne Shorter, Benny Golson, Horace Silver, Walter Davis Jr., Cedar Walton, and Hank Mobley. The JOSHUA BREAKSTONE TRIO, Breakstone on guitar, Eliot Zigmund on drums, and Martin Wind on bass recently released Children of Art (Capri – 74151), an eight-track tribute to Art Blakey’s Jazz Messengers — seven songs written by the players mentioned above, plus an original by Breakstone titled “Children of Art.” Breakstone is a lyrical player, Wind is among the most interesting soloists on bass in addition to his great time, and Zigmund is a wonderfully creative drummer. Together they give the tunes here superb interpretations, putting their own spin on these well-constructed compositions. Well done, gentlemen! (www.caprirecords.com)

High Standards (Fullblast Recordings – 2219) is aptly named, for it presents guitarist MIKE PACHELLI leading a trio with bassist Tony Levin and drummer Danny Gottlieb playing a swinging set of nine standards and Pachelli’s original, “Yardbird Blues,” The other selections are “When You’re Smiling,” “There Will Never Be Another You,” “Skylark,” “Whistle While You Work,” “Sweet Georgia Brown,” “What a Wonderful World,” “Put on a Happy Face,” “These Are Soulful Days” and “Cute.” There is nothing tricky or pretentious here, just a trio of fine players giving straight ahead takes on great tunes.

Ten years ago, bassist JOHN MILLER, who is also active as a musical coordinator for Broadway shows, commercials, television, and films, released a vocal album.  He had been playing guitar and singing for his own enjoyment, and with the help of guitarist David Spinozza, his co-producer, Stage Door Johnny: John Miller – Takes on Broadway (self-produced) became a reality.  It has now been re-released in a special 10th Anniversary Edition.  Miller and Spinozza arranged the 12 selections for musical groups of different sizes.  Miller is vocally inspired by the likes of Mose Allison, Chet Baker and Antonio Carlos Jobim, each of whom, like Miller, had light expressive voices. The songs, with the exception of “Secret Love,” are from Broadway shows, and include ‘Why Can’t You Behave,” “Old Man River,” “Fugue for Tinhorns,” “Hernando’s Hideaway” and “Oh, What a Beautiful Morning.”  This is an nicely unpretentious album that is easy on the ears throughout. (www.johnmillerbass.com)

One of the things that has distinguished NEW YORK VOICES is the eclecticism of the material that the group performs. Reminiscing in Tempo (Origin – 82784) is reflective of that quality.  Long time members, Peter Eldridge, Lauren Kinhan, Darmon Meader and Kim Nazarian are truly a group.  They jointly select the material, with most of the arrangements by Meader, and occasional input from the others.  The program for this album includes jazz tunes, standards, original material and a couple of melodies by Cuban composer Ignacio Cervantes.  The singers are supported on some selections by a small big band, with Meader on alto or tenor sax. As is usually the case, New York Voices keep things interesting throughout Reminiscing in Tempo. (www.originarts.com).