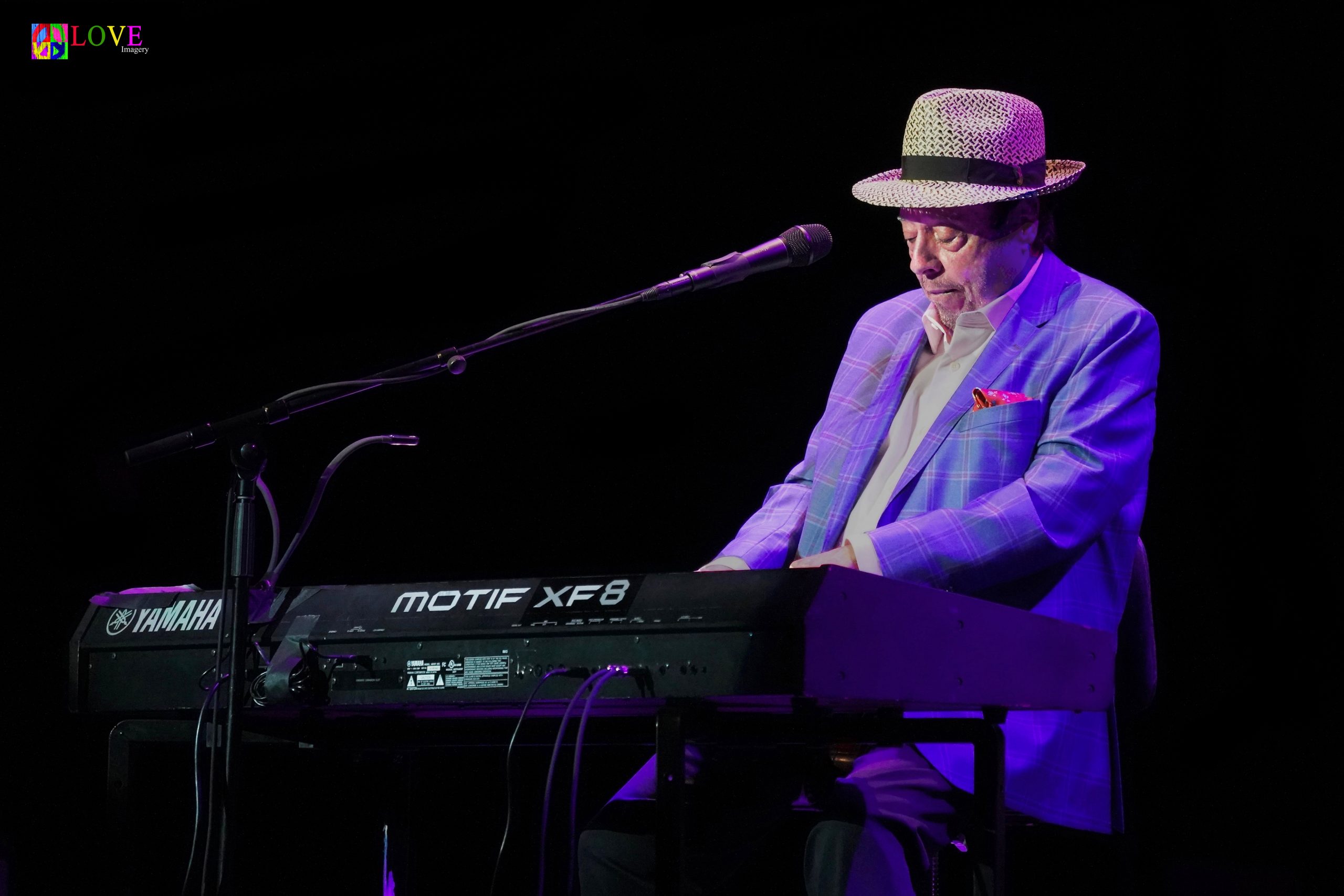 This past October, producer, composer, keyboardist, and vocalist Sérgio Mendes and singer/songwriter Bebel Gilberto presented a special “60th Anniversary of Bossa Nova” concert at the Mayo Performing Arts Center in Morristown. Mendes is one of the most successful Brazilian artists of all time, internationally famous for his group, Sérgio Mendes and Brasil ’66. He has recorded more than 35 albums with numerous gold and platinum recordings and is a six-time Grammy nominee and three-time Grammy winner. In addition, he received an Oscar nomination for his song, “Real in Rio”, from the animated film, Rio.

At the MPAC concert, a saxophone intro led into drums, percussion, guitar, bass, and twin female vocalists joining in on “Magalenha”. On this upbeat and driving song, which Mendes wrote with Carlinhos Brown, he played a syncopated keyboard solo before Scott Mayo was featured on a rousing alto saxophone solo.

The crowd cheered, and the band segued into Antonio Carlos Jobim’s “Waters of March” which opened with a Mayo flute intro. On this infectious bossa nova number, Gracinha Leporace and Katie Hampton sang perfectly in unison in Portuguese before Mendes and guitarist Kleber Jorge joined in on harmony vocals.

Mendes handled the lead in Portuguese on “Ela é Carioca” (Jobim/Vinicius de Moraes), and the female vocalists added harmonies as percussion and synthesized strings rang out over the crowd. Moving into “Upa, Neguinho” (Edu Lobo/Gianfrancesco Guarnieri), Leporace and Hampton sang in two-part harmony on the upbeat number.

Mendes told the crowd a story about the next number, saying, “In 2005, a young man came to my house — will.i.am, from Black Eyed Peas. He told me he grew up listening to my music, and asked me to do the songs I did with Brasil ’66 with him.” Here, Mendes and company launched into “Água de Beber” (Jobim/Gene Lees/Moraes). Starting with an upbeat vocal version featuring three-part vocals on the verse and five-part vocals on the chorus, the arrangement broke into a rap section featuring rapper H2O.

Leporace was the featured vocalist on the beautiful ballad, Chico Buarque’s “O Que Será (So Many Stars).” After Leporace sang, Mendes played the melody up and down the keyboard before he segued into a chordal solo. The arrangement built in intensity as Leporace’s vocal returned with passion, the number ending with great audience applause.

A highlight of the performance was an extended medley of “Consolação” and “Berimbau” which fused the rhythms of Brazil with the rhythms of Africa. Sounding like the original Brasil ’66 recording, Leporace and Hampton danced as they sang in close harmony in Portuguese before Mayo played a staccato flute solo. “In 1983,” Mendes told the audience, “we recorded a song which was a huge hit all over the world,” adding, “It went to Number 2 when Number 1 was Michael Jackson’s ‘Thriller.’”

Mayo and Hampton handled the lead vocals on the power ballad, “Never Gonna Let You Go.” Audience members sang along on the familiar “I’m never gonna let you go/I’m gonna hold you in my arms forever/Gonna try and make up for all the times/I hurt you so” lyric before Jorge played a lyrical electric guitar solo. Vocalizing with emotion, the singers crooned to one another before ending arm in arm to large applause.

The crowd cheered when they recognized the intro to Sérgio Mendes and Brasil ’66’s 1968 Top 10 hit, “The Fool on the Hill.” The female vocalists started off in Portuguese, but switched over to English on the “Well on his way/His head in a cloud/The man of a thousand voices talking perfectly loud” verse before Mayo’s sax echoed Mendes’ keyboard lines, and the audience swayed to the song’s irresistible rhythm. Continuing on, the band played another Brasil ’66 Top 10 hit from 1968, “The Look of Love.” With vocals tight and stylized, the audience couldn’t help but sing along.

At that point, Mendes and company provided the audience with a knock-your-socks-off rendition of Jorge Ben’s “Mas Que Nada” featuring the entire band with the addition of rapper H20.

Earlier, the well-known Brazilian singer/songwriter, Bebel Gilberto, opened the concert with Jobim’s “Wave”. Gilberto — whose father, João Gilberto, is recognized as one of the most iconic figures in Brazilian music — floated onto the stage, her rich alto voice sounding soft and inviting. Gilberto, whose mother, Miúcha, was a well-known singer/songwriter in her native Brazil, received a Grammy nomination for her 2009 Verve Records album, All in One.

The opening set also included the Jobim tunes, “Corcovado” and “Desafinado”. With percussionist Costa playing shells and then chimes to Monteiro’s guitar on these numbers, Gilberto’s vocal was soft, sweet, and full of emotion. Softly motioning as she sang, her voice floated out over the MPAC audience. As she sang her father’s “O Pato,” her voice circled the crowd like an embrace, and she invited the audience to sing along with her on this uptempo number.

Following her rendition of Marcos Valle’s “Summer Samba (So Nice),” Gilberto segued into the theme from the 1964 film, A Man and A Woman. Vocalizing like a brass instrument while pantomiming playing a trombone, Gilberto conducted the audience as they sang along on the familiar melody.

At the end of the concert, Gilberto returned to the stage to join Mendes’ group as they all performed Jorge Ben Jor’s  “Pais Tropical” (Tropical Country) for a final encore.