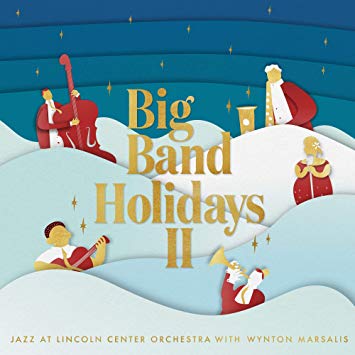 Each year the Christmas Season brings a new influx of holiday music. Here are the new releases from the current crop that I found most appealing.

Each year the Christmas Season brings a new influx of holiday music.  Here are the new releases from the current crop that I found most appealing.

Big Band Holidays II (Blue Engine Records – 0020) features the JAZZ AT LINCOLN CENTER ORCHESTRA with an outstanding collection of guest vocalists assaying eleven seasonal selections.  The tracks are culled from the annual Christmas concerts by the JALCO between 2015 and 2018.  The arrangements are by members of the orchestra, including Wynton Marsalis, Sherman Irby, Carlos Henriquez, Ted Nash, Chris Crenshaw, Ali Jackson and Victor Goines.  The program comprises four instrumentals (“It’s the Most Wonderful Time of the Year,” ”Rise Up, Shepherd, and Follow,” ”Brazilian Sleigh Bells” and “Snowfall;” and vocal selections by Catherine Russell (”Cool Yule,” “What Will Santa Claus Say (When He Finds Everybody Swingin’” and “Silver Bells”), Denzil Sinclaire (“We Three Kings”), Aretha Franklin (“O Tannenbaum”), Veronica Swift ((Everybody’s Waitin’ for) The Man with The Bag”) and Denzil Sinclaire with Audrey Shakir (“Silent Night”).  The variety gives the album nice pacing, and the execution is consistently of the highest level. This is a perfect blending of jazz and Christmas! (blueenginerecords.org)

One of the most creative cats on the scene today is Glenn Crytzer.  He is primarily influenced by the jazz of the 1920s, 1930s and 1940s, but has found ways to present the music without having it sound at all dated.  One of his talents, extensively on display on Underneath the Mistletoe (Self-Produced) by THE GLENN CRYTZER ORCHESTRA, is that for writing new songs that capture the feel of the eras that he emphasizes, ones that fit seamlessly with the vintage material that he includes in his programs.  They are well crafted, and usually sound like you must have heard them before, that is how comfortable they immediately strike the listener. Eleven of the 20 selections on this collection are Crytzer originals, many of which are sure to be picked up by other performers in the future.  The familiar selections are “Over the River and Through the Woods,” “Deck the Halls,” “Tea (Chinese Dance from The Nutcracker), “Toyland,” “Jolly Old Saint Nicholas,” “I Saw Three Ships,” “Silent Night,” “Up on the Housetop” and “The Dreidel Song.”  A nine-piece string section supplements the 15-piece jazz ensemble led by Crytzer, who plays guitar and banjo, provides the arrangements and contributes occasional vocals.  Among the musicians are NJJS favorites like trumpeter Mike Davis, trombonist Jim Fryer and reedmen Dennis Lichtman, Jay Rattman and Dan Block. Hannah Gill and Dandy Wellington are on hand to handle the other vocal chores.  Underneath the Mistletoe will delightfully enhance your holidays!  (www.glenncrytzer.com)

In recent years, there has emerged a small, but appealing subset of jazz musicians, ladies who sing and play the bass.  Among the best of them is KRISTIN KORB who originally came to prominence on the LA scene, but now lives in Denmark.  That Time of Year (Storyville – 1014323) finds Korb and her bandmates, Magnus Hjorth on piano, Snorre Kirk on drums and Mathias Heise on harmonica, offering up 13 appealing tracks of Christmas sounds.  Korb is a superb vocalist who has a terrific jazz sensibility that she has carried over from her longer experience as a jazz bassist. She has chosen a nice mixture of the familiar like “I’ve Got My Love to Keep Me Warm,” “Santa Baby” and a pairing of “Up on the Housetop” with “Here Comes Santa Claus;” some lesser known pop seasonal songs, “Christmas Will Really Be Christmas” “That’s What I Want for Christmas and “Christmas Is;” and added a few carols, a nicely sung “Silent Night,” and a pair of instrumentals, “Angels We have Heard on High” and “Wee Three Kings.”  KristIn Korb has delivered a nice present with That Time of Year. (www.storyvillerecords.com)

ERNIE HAASE & SIGNATURE SOUND is an Ohio-based vocal quartet that is primarily know for singing gospel music, but A Jazzy Little Christmas Gaither – 9429) finds them taking a jazzy tour through a 14-track program of Christmas songs, with support from a fine group of New York City musicians, including a terrific rhythm section of Billy Stritch on piano, Neal Miner on bass and Ray Marchica on drums.  The vocal group includes Haase, Devin McGlamery, Dustin Doyle and Paul Harkey. In the tradition of The Four Freshmen, they create interesting harmonies while fitting into a variety of settings, solely a rhythm section, a rhythm section plus horns, and some tracks where there are strings added. Moat of the selections are familiar Christmas songs.  Haase has included two songs that he wrote with Wayne Haun and Joel Lindsey, “Christmas in Manhattan” and “Sometimes I Wonder,” both of which are tunes that should find favor with other singers. A Jazzy Little Christmas is a wonderfully accessible collection that is sure to add joy to your Christmas celebrations. (www.erniehaase.com)

Christmas All the Way (Self-Produced) is a superb release from ACCENT, a six-man vocal ensemble comprising individuals from five nations.  They create a rich harmonic wonderland that is stunning to hear from the opening track to the last.  The members of ACCENT are tenors Simon Åkesson (Sweden), Jean-Baptiste (“JB”) Craipeau (France), Danny Fong (Canada) and Andrew Kesler (Canada); baritone James Rose (United Kingdom) and bass Evan Sanders (United States).  Their program reflects their international roots with the inclusion of “Jul, Jul, Strålande Jul” from Sweden, “Petit Papa Noël” from France, plus an original by Rose, “Winter Winds.” Other selections include the opening medley of “Ding Dong Merrily on High”/“What Child Is This?”/“O Christmas Tree,” “It’s the Most Wonderful Time of the Year,” “I’ll Be Home for Christmas,” “A Holly Jolly Christmas,” “Let It Snow! Let It Snow! Let It Snow!,” “The Christmas Song” and “O Holy Night.”  The settings are varied with strings on two selections and Gordon Goodwin’s Big Phat Band on another two. All in all, this is the perfect album for background play when the Christmas presents are being opened. It will put you in the right mood, and keep you there. (accentvocal.com)

Guitarist PETER CURTIS sure knows how to develop an eye-catching title for an album, Christmas with Your Jewish Boyfriend Bella Barktalk Records).  This is also the title of the closing song of the album, one that he wrote for his girlfriend, celebrating their first Christmas/Hanukkah together. The other selections are all pop seasonal tunes written or co-written by composers and lyricists with Jewish roots.  Curtis is equally at home playing jazz or classical guitar, has a nicely swinging, straight-ahead style that he applies winningly to each selection. Among the songs are “Winter Wonderland,” “White Christmas,” “Sleigh Ride,” “Silver Bells,” “Rockin’ Around the Christmas Tree” and “Christmas Time Is Here.  Curtis has come up with an interesting concept for his album, and has carried it off with aplomb. (petercurtismusic.com)

Silent Night (StringTime Jazz) finds guitarist JOHN BASILE playing 12 seasonal selections on his guitars and Midi Guitar, the latter of which enables him to add a variety of additional instrumental effects to various tracks.  He does so with great imagination and intelligence, always keeping an underlying feeling of swing present. The program includes “God Rest Ye Merry, Gentlemen,” “Baby, It’s Cold Outside,” his own “Lulladay,” “Silver Bells,” “Silent Night,” “Toyland,” “Oh Tannenbaum,” “What Child Is This,” “A Child Is Born,’ “Christmas Time Is Here,” “The First Noël” and “Auld Lang Syne.”  You will find that this album keeps you coming back for more. (www.johnbasile.net)

If you are looking for a Christmas album with a soulful, bluesy underpinning, Eight Track Christmas (Strikezone Records – 8819) by guitarist DAVE STRYKER is a good choice.  Stefon Harris on vibes, Jared Gold on organ and McClenty Hunter on drums join Stryker for a ten-song excursion that never ceases to delight.  Stryker is the main instrumental voice with Harris, or Steve Nelson on the last track, and Gold occasionally sharing the spotlight. The songs are “This Christmas,” “Greensleeves,” “God Rest Ye Merry, Gentlemen,” “Happy Xmas (War Is Over),” “Soulful Frosty,” “Christmas Time Is Here,” “Sleigh Ride,” “Blue Christmas,” “We Three Kings” and “O Tannenbaum.”   Stryker has done a fine job of combining the joys of the Christmas season with the joys of jazz. (www.davestryker.com)

A Bull City Holiday (Self-Produced) is a swinging collection of Christmas and winter season songs by KEENAN McKENZIE, the tenor saxophonist/clarinetist leader of the  band heard on the album. The Bull City is Durham, NC, where McKenzie is based, and where he is also a member of The Mint Julep Jazz Band.  McKenzie has created the words and music for 11 well-crafted original tunes that have the feeling of traditional pop songs. His arrangements have a similar feeling, and are played with precision by the band.  Also included is a terrific chart on “Auld Lang Syne.” There are seven different vocalists, Mark Wells, Tamisha Waden, Shana Tucker, Meggan Cashwell, Dave Wright, Marcia McKenzie, and Laura Windley. Windley is the superb vocalist for the Mint Julep group and has four featured numbers on the album.  This is a perfect album for a Christmas-time party, especially if there are some rug-cutters in the crowd. (www.keenanmckenzie.com)

If you are looking for a spirited new Christmas album that is full of good cheer, then Christmas at Birdland (Club 44 Records – 443101) is just the one for you.  The album features vocals by BILLY STRITCH, JIM CARUSO and KLEA BLACKHURST, with Stritch on piano, Steve Doyle on bass and Daniel Glass on drums.  There are 13 tracks that include the familiar, “The Christmas Waltz,” “Little Jack Frost Get Lost,” “The Christmas Song”, and the fabulous Kay Thompson arrangement of “Jingle Bells;” with some nice selections that were new to me, “Manhattan in December,” “You Meet the Nicest People” and “Mister Santa.”  They reached deep to find a gem from Cy Coleman and Floyd Huddleston, “He’s Stuck in the Chimney Again,” playfully sung by Blackhurst. They have created some interesting medleys, including “Christmas Is Starting Now” and “It’s the Holiday Season,” “It Happened in Sun Valley” and “Snow,” “Silent Night” and “A Child Is Born,” plus “Winter Weather” and “Winter Night.”  Stritch, Caruso and Blackhurst work well together, and their solo tracks are all delightful. Caruso hosts the Cast Party sessions at Birdland each Monday evening, and Stritch is often the pianist for these shows. Blackhurst is a versatile performer but is most noted for her Ethel Merman shows, for she has an uncanny ability to capture Merman’s unique vocal sound, and strong personae.  The best word to describe this collection is FUN! (amazon.com)