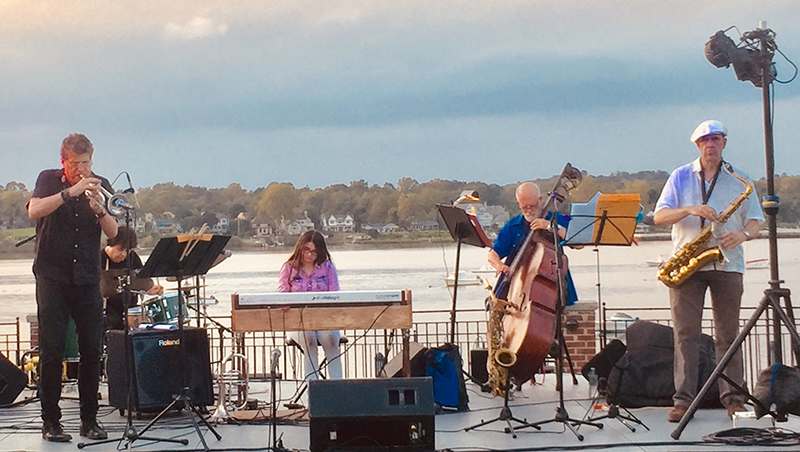 “This is the first time playing with my own quintet,” keyboardist Leonieke Scheuble announced to the crowd at 2019’s final Red Bank summer Jazz in the Park concert on August 22. Based on the band’s performance and reaction of the Riverside Gardens Park audience, there will be many more times in the future. The 17-year-old from Rockaway Township led a group of seasoned veterans through a selection of hard bop standards from the 1950s including Bobby Timmons’ “Dat Dere”, Horace Silver’s “Senor Blues”, and Nat Adderley’s “Worksong”.

Shifting between piano and organ, Scheuble demonstrated that she was in charge, while, at the same time, exhibiting a refreshing humility and respect for the members of her band who included the 91-year-old bassist, Bill Crow, trumpeter Joe Magnarelli, saxophonist Adam Brenner, and her father, drummer Nick Scheuble. When she was introducing “an obscure Clifford Brown tune called ‘George’s Dilemma’,” she nodded toward Crow and added, “the bass part is hard. We’re putting our bass player to work on this one.”

The summer of 2019 was a particularly busy season for Scheuble, who is entering her senior year at Morris Hills High School. Her performance venues included South Orange Downtown at Sundown; New Brunswick’s Tavern on George, part of the New Brunswick Jazz Project’s continuing live jazz series; the Roxbury Public Library; and Shanghai Jazz in Madison.

When she was five or six years old, Scheuble saw the movie, Ray, about Ray Charles, and that inspired her to learn to play the piano. Her mentor was veteran pianist Steve Ash, but she also received encouragement from two celebrated jazz organists, Joey DeFrancesco and Dr. Lonnie Smith. In 2015, she was voted “Best Up and Coming Young Jazz Artist” by the readers of Hot House Magazine.

Other selections captivating the Red Bank crowd included Stanley Turrentine’s “Sugar”, Fred Rose’s “Deed I Do” (“I’m not sure if this is from 1926 or 1929,” she said), and a second Bobby Timmons, piece, “Moanin'”, which Scheuble pointed out was the title track for a classic 1958 Art Blakey Blue Note album.

The Jazz in the Park series is curated and produced by the Jazz Arts Project in collaboration with Red Bank Parks and Recreation. Major sponsors are Hackensack Meridien Health’s Riverview Medical Center and Lomurro Law in Freehold.