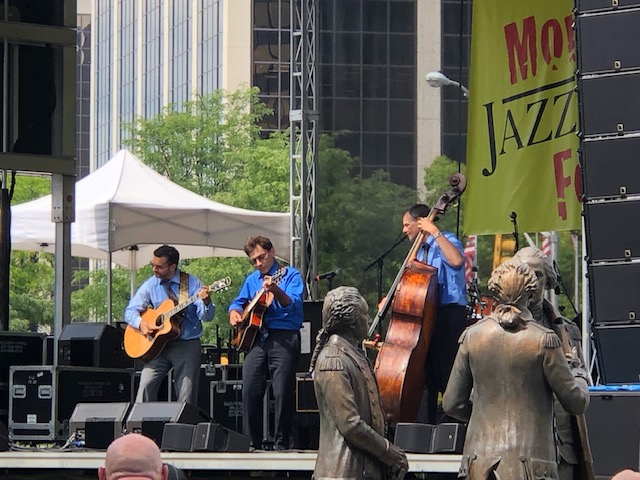 Before dazzling the audience at the Morristown Jazz & Blues Festival with music ranging from Cole Porter to Rimsky-Korsakov, guitarist Frank Vignola made sure the crowd knew where his inspiration came from. “This afternoon,” he said, “is a tribute to Bucky Pizzarelli.”

The 94-year-old Pizzarelli played with Vignola and his guitarist partner, Vinny Raniolo, at previous Morristown festivals, and, in a later interview, Vignola said, “Without Bucky Pizzarelli, we would not know jazz guitar as it is today. Bucky always had a great way of starting a show, usually with a medium tempo song that everyone knew. This would draw the audience in and give the band a chance to get comfortable on stage. Then, the second song, he would swing it a little, and the third one, bingo! Knock it out of the park. What a great performer and man.”

At this year’s festival, held on Saturday, August 17, Vignola teamed with Raniolo and bassist Gary Mazzaroppi for selections that included Irving Berlin’s “Cheek to Cheek”, a Porter medley, Antonio Carlos Jobim’s “Girl From Ipanema”, Rimsky-Korsakov’s “Flight of the Bumblebee”, Django Reinhardt’s “Songe d’Automne”, Charles Fox’s “Killing Me Softly With His Song” and a stunningly original interpretation of Paul Simon’s “The Sounds of Silence.”

Vignola is looking forward to a September 26th date at Birdland Theater in New York City — Frank Vignola’s Guitar Night, a reunion of the guitarists who played on the 1995 album, Concord Jazz Guitar Collective, which featured Vignola, Howard Alden and Jimmy Bruno.  They will be joined by Mazzaroppi and drummer Vince Cherico; and the young Finnish guitarist Olli Soikkeli will be there as a special guest. “I’m really excited about this event,” Vignola said.

Vocalist Antoinette Montague opened the festival with her group, the Antoinette Montague Experience, making a Second Line Parade entrance from the back of the house to “Let the Good Times Roll”.  Her other selections included Jimmy McHugh’s “I Can’t Give You Anything But Love”, Ellington/Strayhorn’s “Take the A Train”, the Gershwins’ “I Love You Porgy”, and Carole King’s “A Natural Woman”.

Harmonica player and vocalist Rob Paparozzi, following Vignola, wrapped up the jazz portion of the festival, celebrating the 50th anniversary of Woodstock by playing some of the songs he performed there as a member of Blood Sweat & Tears. The blues artists in the evening were the Bernard Allison Group and Davy Knowles.