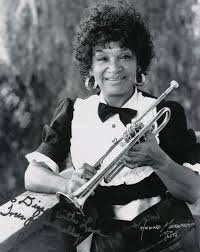 In the early 1950s, Bryant was playing trumpet and leading a combo in a Hermosa Beach, CA, club when she noticed Charlie Parker in the audience. “He went up to the bandstand and asked if he could borrow a tenor [saxophone],” she told The Los Angeles Times in 2002. “I almost wet my pants.” Then, they played a duet of Parker’s “Now’s the Time”. Parker, Bryant said, “took that tenor and played the rim off of it. My knees were weak all while we were playing.”

While working in Las Vegas in the 1950s and ’60s, Bryant would often do a vocal imitation of Louis Armstrong. “One night,” she told JazzTimes in 2007, “I heard this sound coming from the casino. And here comes Louis with his whole band, all of them . . . They marched right up onstage and did my whole act, but for real. It was great.”

In 1956, trombonist Melba Liston arranged for Bryant to meet Dizzy Gillespie, and, according to Giovanni Russonello, writing in The New York Times (September 2, 2019), “He took her under his wing and gave her a trumpet mouthpiece that she would use for decades.”

Often faced with sexist discrimination, Bryant said her father encouraged her to persevere in her desire to be a jazz trumpeter.  In the JazzTimes interview, she said, “My father told me, ‘It’s going to be a challenge, but if you’re going to do it, I’m behind you all the way.’ And, he was.”

In 1943, Bryant attended Prairie View A&M, a black school outside of Houston, because it had an all-female 16-piece jazz band. When her family moved to Los Angeles two years later, she transferred to UCLA. She joined the International Sweethearts of Rhythm in 1946, later moving on to another all-female group, the Queens of Rhythm. Her only album as a leader was Gal With a Horn, recorded on the Mode Records label in 1957. Against her wishes, the record producer insisted she sing in addition to playing trumpet.

Bryant led a combo called Swi-Bop in the ’70s and ’80s that included her brother Melvin and
son Darrin as vocalists and son Kevin as drummer. In 1988, motivated by a Dave Brubeck performance in Moscow, she wrote to Mikhail Gorbachev, then leader of the Soviet Union, asking if she could become “the first lady horn player to be invited to your country to
perform . . .” In 1989, she was invited to play there and did a two-week tour, accompanied by her sons and a film crew.

In 1996, Bryant retired as a trumpet player, due to heart surgery, but continued to lecture and occasionally sing. In 2002, she received the Mary Lou Williams Women in Jazz Award from the Kennedy Center in Washington, DC. “Jazz to me is a lifelong quest,” she said in the Los Angeles Times interview, “because you never finish searching for that high you can reach when everything’s clickin’, and the audience is right there with you. I get goose bumps thinking about it.”

In addition to Darrin and Kevin, she is survived by two other children: April and Charles Stone, from her marriage to bassist Joe Stone;