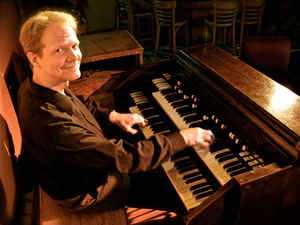 On Sunday, September 15, Braham, on piano, and Rick Crane, on bass, will be accompanying vocalist Frank Noviello. The following month, on October 20, Braham, on organ, will be leading the house band in an “old fashioned jam session/open mic”.

Keyboardist David Braham has played with jazz giants such as saxophonists Lou Donaldson, Houston Person, and vocalist David “Fathead” Newman; and AllAboutJazz has described him as “one of the best organists on the scene today.” The Union, NJ, resident will be doing double duty this fall, appearing at the New Jersey Jazz Society Socials at Shanghai Jazz in both September and October.

On Sunday, September 15, Braham, on piano, and Rick Crane, on bass, will be accompanying vocalist Frank Noviello. The following month, on October 20, Braham, on organ, will be leading the house band in an “old fashioned jam session/open mic” along with guitarist Mark Strickland and drummer Diego Lopez.

Jazz critic Bill Milkowski once described Noviello as a vocalist who “is constantly climbing out on a limb with his singing style, challenging himself and listeners by daring to do things spontaneously.” The Star-Ledger called him “a first-rate jazz singer with a luminous tenor voice and a superbly supple sense of time.” In 2007, Noviello teamed up with pianist Tomoko Ohno to record an album on the Silk Tree Records label entitled Jilted. According to Jersey Jazz‘s Joe Lang, Noviello’s “singular sound and inventive phrasing are wonderfully complemented by Ohno’s imaginative accompaniment.”

Braham, a protege of organists Richard “Groove” Holmes and Brother Jack McDuff, is also an educator. He currently teaches fifth grade band and orchestra at the Jefferson Elementary School in Union. In an interview with the Star-Ledger‘s George McNish several years ago, Braham said, ” I teach band and orchestra instruments. When a student gets the first six, it’s a big milestone and heartwarming.”

Rick Crane studied under legendary bassists Michael Moore and Rufus Reid. In 2013, he was featured on bass, while Moore played piano, on the Traditions Alive album, The Michael Moore Trio, Live at Shanghai Jazz. They were joined on the CD by drummer Joe Corsello.

Guitarist Mark Strickland was influenced by Kenny Burrell, West Montgomery, and Joe Pass. He has performed with drummer Grady Tate and bassist John Heard, among others. Drummer Diego Lopez established himself on New York’s music scene in 2000, working with such musicians as pianist Hilton Ruiz, clarinetist-saxophonist Paquito D’Rivera, and tenor saxophonist Gato Barbieri.

The New Jersey Jazz Society produces 10 Sunday Jazz Socials a year, all of which are free to members. Admission is $10 for non-members, and there is a $10 food/beverage minimum. Shanghai Jazz is located at 24 Main St. in Madison. Doors open at 2 p.m, and the music is performed from 2:30-4:30 p.m., with one short intermission. For more information, email music@njjs.org, or call (973) 372-5409.

Funding for the NJJS Socials has been made possible in part by Morris Arts through the New Jersey State Council on the Arts/Department of State, a partner agency of the National Endowment for the Arts.