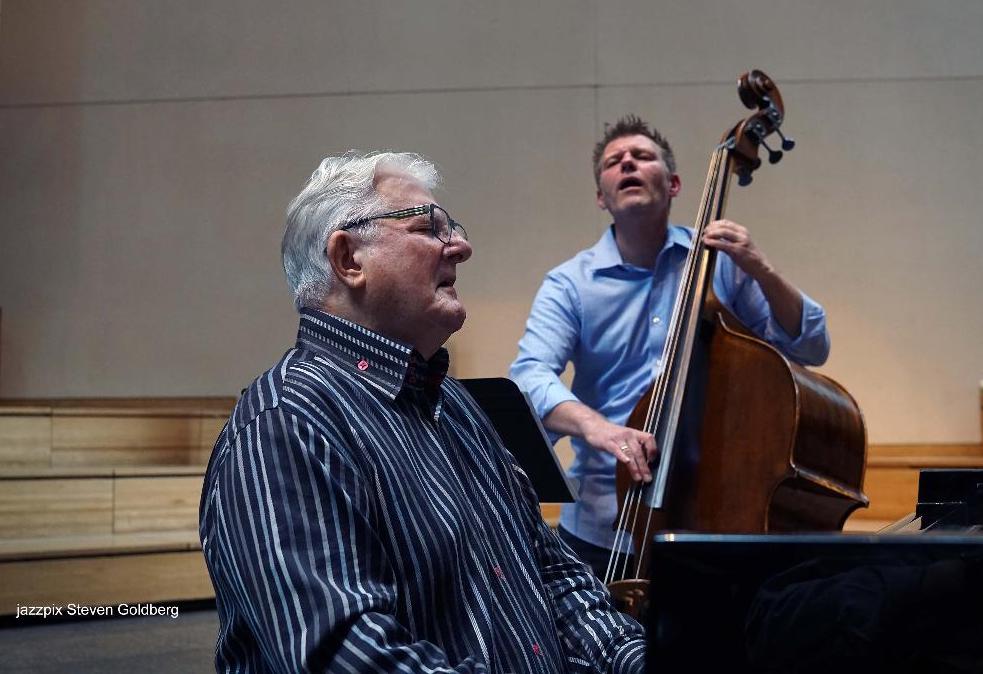 (continued from the September-October 2019 issue of Jersey Jazz Magazine).

JJ: Is there any film
novel or story that you feel captures the life of a musician?

BM: There is the film Vitus about a child prodigy pianist. The great thing about the film was how the kid rebelled against being a prodigy, and wanted to be a regular kid. I think it’s a Swiss film.

(continued from the September-October 2019 issue of Jersey Jazz Magazine).

JJ: Is there any film novel or story that you feel captures the life of a musician?

BM: There is the film Vitus about a child prodigy pianist. The great thing about the film was how the kid rebelled against being a prodigy, and wanted to be a regular kid. I think it’s a Swiss film. There is so much stuff available on YouTube. I’ve encouraged my students to watch people like Glenn Gould in the classical field, and Tatum, Bill Evans and Monk. Watch them play since they are gone. Some jazz movies out there — I love the Chet Baker film Let’s Get Lost, and I like Bird. Some people didn’t take to it. I thought it was a great movie.

Reading people’s autobiographies is always instructive and illuminating. I just got Herbie Hancock’s autobiography Possibilities. I just started it, and it looks fascinating. He is such a great musician and has such a wide and varied career. Others that inspired me were autobiographies by Horace Silver, and Gary Burton. There are also many great biographies. I’m a fan of Russian music; Prokofiev, Shostakovich and Rachmaninov. There was a book written by Shostakovich called Testimony which is chilling but very informative about what it was like to be a composer under the horrors of Soviet rule.

JJ: You wrote that your minister father played various instruments and your mother sang at home. Besides gospel, what other music did they do?

BM: That’s all they did. They liked Broadway musicals somewhat. They had recordings of Oklahoma and The Sound of Music, but the music they were involved with was church music. My mother was a self-taught singer, but she had a beautiful voice and sang in church. That was my first accompanying experience, playing for choirs and soloists in church. Gospel music was the first music that I heard. We lived in Los Angeles at the time, and we would go to black churches. We had a shared service thing where people from their church would come to ours, and we would go to theirs. So I then had my first exposure to black gospel music. This was in the ’50s, and those churches would have a Hammond Electric Organ, a drummer and bass player, so it got rockin’.

At the same time I was listening to rhythm & blues, Sam Cooke, Bo Diddley, Little Richard, Dion and the Belmonts, the Coasters and all those girl groups. I didn’t hear any jazz ‘till I was 15 when I was a junior in high school. The church choir director was a working musician, a trumpet player doing little jazz gigs. He took me to hear Earl ‘Fatha’ Hines play a solo concert, after that, he took me to the Blackhawk to hear Miles’s group. It was at the time Miles recorded Live at the Blackhawk. I was probably at some of those sessions. You couldn’t get into The Blackhawk if you were under 18 unless you were accompanied by an adult. They had this minors section that was separated from the rest of the club by chicken wire so nobody could slip you a drink. [Laughs] [It was] an interesting and quite famous place.

Also I had a high school band teacher that was a very hip working musician. He turned me on to the first big band records I heard. He played Stan Kenton’s Artistry in Rhythm. I was blown away by the harmonies and the big sound Kenton had. It was a combination of people in my life that turned me on to the music, and the radio. I remember hearing Howard Rumsey and his Lighthouse All Stars, Bud Shank, Bob Cooper, Russ Freeman, Claude Williamson and Shelly Manne.

JJ: How did you react when you first heard black gospel music?

BM: I loved it. I heard similarities between it and the rhythm & blues I was hearing on the radio.  The rhythmic aspect of it was thrilling. In our church we had an organ and a piano and my father would sometimes play his trombone or his guitar, but we didn’t have bands like the black churches in LA had at that time. Of course that has become a fairly common phenomenon in religious music. It was thrilling to hear at that very formative time of my musical life. At the same time I was taking classical piano lessons and going to concerts and hearing classical music played live, not just on records.So I was really getting mainstreamed in different aspects of music in general.

JJ: When did you start studying classical piano?

BM: I started when I was five, and I was playing simple classics when I was seven or eight years old. I had three major teachers in my early life that got me both into the classic literature, and also gave me great fundamentals with my hand positions and technique. They really set the stage..

JJ: Would you mention any young musicians you mentored over the years, or helped get important gigs that we would know?

BM: When I first came to New York, Bill Charlap came to hear me play many times. He asked for lessons and I said, “I’ll give you a lesson right now; four words – Jimmy Rowles/Sonny Clark. You should listen to those guys. There is a lot of space in their playing.” At the time, Bill was playing very busily, and space was something he could do well to learn more about. That is certainly an aspect of his playing today. Then when I left Gerry Mulligan, I recommended Bill and he got the gig.

A pianist named Chris Cuvier has been a big fan of mine, and claims that I am a big influence on him musically. I’ve never given him a lesson, but he has studied my recorded work and has come to see me live. I’m proud to say he wrote a song for me, a lovely piece called “Mays in the Mirror.”

JJ: Please tell us how you came to record with Ed Bickert?

BM: I used to go to Toronto every year and play at one of three places there. Often they would be trio gigs with Terry Clarke and Neil Swainson. One trip I decided to just play duo with Ed Bickert as I always loved his playing. That began an association of several live gigs in the United States and Canada. Then Carl Jefferson recorded us on his Maybeck Recital Hall duo series. We had a week of work lined up in Toronto, and the morning of the opening night, Ed slipped on the ice and broke some bones in his wrist. He couldn’t do that week, and I had to get another guitar player. Shortly after that fall, his wife passed away, and for a variety of reasons, health and personal, he gave up the instrument. (Guitarist Ed Bickert died February 28, 2019. He retired from active playing in 2000, the year his wife Madeline died).

JJ:  You have recorded a lot with Marvin Stamm. How did your association start?

BM: Marvin Stamm and I have had a long association. I’ve been on his records and he’s been on mine. We co-founded that Inventions Trio together. Marvin has such a breadth to his playing; he gets a wonderful warm sound in every register of the horn. He has been a lead player and also in the solo chair of big bands. He can play like an orchestral player when called upon to do so as in many of my pieces for Inventions Trio. He is a wonderful soloist, great on the trumpet and flugelhorn; and he can sight read anything you put in front of him.

JJ: What did you think of the Delaware Water Gap when you first visited Phil Woods’ place?

BM: I loved that area. In fact my home in Shohola is in the northern Poconos, one hour north of the Water Gap. The reason I bought that in 1989 was to be out in the woods and near water. I’m on a lake near the Delaware River. I love to hike, swim, and sail. That whole area is gorgeous, and still fairly under-developed and under-populated. I love the Deer Head Inn and love to play there. In fact the album that came out the first week of February was recorded in the Deer Head Inn on Phil Wood’s piano. He willed it to them.

Jazz’s Past and Future Present in Newport