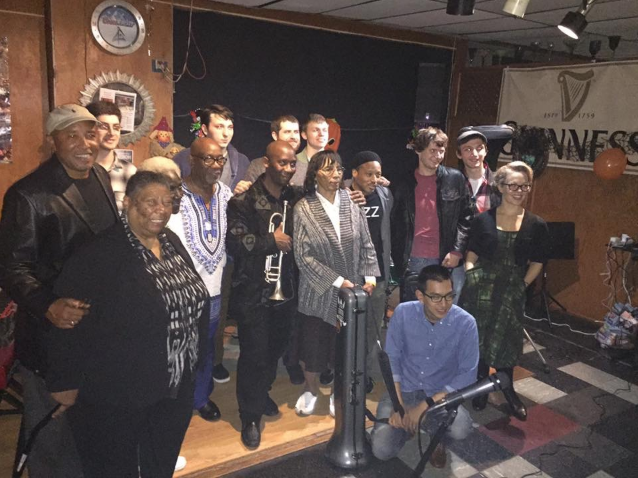 Welcome to the NJJS Jazz Blog

James Pansulla, a board member of NJJS and dedicated patron of the arts, tells his compelling story of his journey into the New Jersey jazz scene…

We welcome you to this new and expanded area of the website – The Blog – designed mainly to have you meet and greet New Jersey-based jazz musicians of all ages and stripes. One of the goals – and a terrific added benefit – would be to inspire you, the reader, to new levels of fandom and jazz activism in support of these wonderful artists during some tough economic times for them. Jazz musicians, after all, are bringing culture to our neighborhoods and making the world a more beautiful place just by walking into a room and filling it with the sounds of jazz. When they gather in one of the many places in North Jersey we will report from, it often looks something like this:

A lot of interesting stories in that photo. How do I know all this? Here’s my narrative, in words and photos, of how I came to be a Jazz Society Board member, contributor, patron and friend to a slew of musicians, especially those looking to gain some kind of foothold in a musical career.

Being neither a professional musician nor writer, rather just a huge fan of the music like most of the readers here, the best approach for me to take would be to just personalize a narrative describing how I came to commit a chunk of time each week to this endeavor.

Hopefully, there will be a few more who will heed this call to be a little more involved in any number of ways, especially in areas of great need. At the top of the list is simply showing up at a jazz-hosting venue near you. If we can inspire just a few fellow fanatical and free-spirited patrons of the music, then this will all have been worth doing.

If you’ve made it over to here on this particular website, then you already know that with the large-size pizza that is modern American culture, only a very thin slice is carved for jazz. And a frequent topic of this blog – support of Emerging Jazz Artists – only gets the top crust, maybe even just a pile of crumbs, from that already-diminutive slice of the pie.

I can throw you some pessimistic facts and figures in support of this outlook. But let’s not go there just now. Instead, as mentioned, I’ll retrace my own steps to this point. It’s not the usual path most people take. Here’s an old Polaroid shot of my mother and me from a while ago, sans gray. She definitely figures in this narrative. Behind us is simmering Italian food, which she often made for large numbers of visitors, the more the merrier.

Now fast forward many years later, here posing with dear sister. You can’t really tell that she has encroaching dementia, often forgetting the recipes for stuff she’d been cooking for decades. By 2012 they told us that for her own safety she couldn’t be by herself anymore. So I rearranged my schedule, having dumped a high-stress full-time job in favor of part-time work. (I’ll get to the jazz part of it in a minute, wait for it.)

By the time this photo was taken you could pretty much tell. Here she just finished mashing together waffles and ice cream but was long-since done with caring about such things. She’d say something off the wall, and then just smile away. That smile was there for me and for everyone else in the vicinity, every time I went to the nursing home to help out with supper, which was 6 days a week for the last two and a half years of what was 5 years’ worth of daily care giving. It was one of the best things I have ever done.

There are 7 million families in the country currently dealing with a dementia-related illness. In New Jersey there are 10,000 families under some type of distress with someone who needs more care than the family can attend to. So my situation was certainly not unique.

As you can imagine, you will see some strange goings on that can only happen on an Alzheimer’s ward. Mostly though it was down time and carrying out the mundane chores which someone with advancing dementia needs help with.

In the midst of all this, something else began unfolding and becoming clearer to me, in connection with the music. I went into the nursing home each day at suppertime with an openhearted attitude, and came out with that feeling still intact, stronger even. But there were many days when dealing with everything was pretty stressful. I had memorized the weekly schedule of places with live jazz, and so rather than drive straight home in a frazzled state I would fan out in whatever direction I needed to go to find the live music.

And so for several nights each week I got what I needed: A one-hour vacation spot, always in a different nightly location and containing all the elements of a Dionysian festival: notably good performances, rhythm and harmony, food and libations, color and celebration. Because these were often the nights for open jams, there was also the element of surprise thrown in. You would never know who would show up on any given night.

Here’s one of the places: the old Robin’s Nest, a cozy little joint out by the Linden airport:

Another one hosts an excellent jam on Monday nights – the Brightside Tavern in Jersey City:

The granddaddy of all Jersey jazz jams – the Tuesday night jam at Crossroads in Garwood – lasted an unheard-of 19 years. Pictured is former NJJS Board member Stan Myers, dressed to the nines as emcee. Crossroads, like many of these places on the jam circuit, had a little bit of raunch going for it but that didn’t bother me one bit. The music from the raised stage hit you like a wave as you walked in, the Hammond-organ bass lines shaking the floor:

Over time I would chat and get familiar with many of the musicians that dropped by. Without a doubt they are engaged in a remarkably good undertaking, best experienced live so as to absorb all that positive energy. The younger ones, in particular those who have mastered their instruments after years of study and training, were eager and equally-important contributors.

These days I never tire of singing their praises. Theirs are also some of the voices you will hear in this section of the blog. They have a lot to say.

But there was no getting around the fact that just about every one of the venues, especially those hosting the younger musicians, was experiencing various degrees of financial struggle, from Trenton and New Brunswick to the south into Morris County further west, over to the Oranges, Newark and Montclair and finally to Jersey City and up to Englewood further north.

I take notice now more than ever when someone waxes philosophical about what jazz means to people. Here’s NPR’s Eugene Holley in his tribute to Albert Murray on NPR’s Blog Supreme, (“What Albert Murray Taught Us About Jazz”, Aug 24, 2013), remembering him as someone who could wonderfully express such things:

“Albert Murray celebrated jazz as the most advanced and comprehensive blues-derived art form, one which provides people with a strategy for living with and triumphing over difficult conditions with dignity, grace and elegance.”

Jazz worked for me like that, and in a big way.

Thanks, and I hope to see you on the circuit. You can reach me at JazzEducation@njjs.org.

Everything you ever need to know about flowers