This is one of two articles from the July 2021 issue of Jersey Jazz Magazine being made available to everyone. For complete access to all articles in our award-winning Jersey Jazz magazine, please join the New Jersey Jazz Society by clicking HERE.

For the first time in its nine-year history, the Sarah Vaughan International Vocal Competition named two winners of its annual contest: 26-year-old Gabrielle Cavassa of New Orleans and 25-year-old Tawanda Seussbrich-Joaquim of Los Angeles. The finals for the 2020 competition, originally scheduled for November 2020, were postponed by the pandemic and held on June 6, 2021, at the New Jersey Performing Arts Center.

At April’s socially-distanced Exit Zero Jazz Festival in Cape May, NJ, Gabrielle Cavassa ignited the crowd gathered near the Cape May Ferry when she invited her friend, vocalist Cyrille Aimee (and former Sassy Award winner) to the stage to join her in a duet of Frank Loesser’s “I’ve Never Been in Love Before”.

That song had special meaning. Cavassa (left photo above) was a finalist in the 2018 Sassy competition, and that was one of the songs she sang. She almost didn’t repeat it in the 2020 contest, but, “it’s kind of a tradition with me. I end with that song on gigs a lot. Maybe I just wanted something that I know like the back of my hand, something that felt really comfortable.”

Cavassa considers herself “a romantic. I think I’m changing,” she said, “but one of my favorite things about standards is that the concept about romance is so different than what we talk about today.” That’s the reason she loves the Billy Eckstine song, “I Want to Talk About You”, which is on her self-titled first album, released last year by 711330Records DK2. “Maybe someday I’ll grow into the independent woman,” she added, “but right now I’m so romantic and vulnerable in my emotions, and I feel the world isn’t. There are so many things that I sing that I don’t think I’m allowed to say.”

Growing up in Escondido, a suburb of San Diego, Cavassa heard “a lot of Frank Sinatra because my grandpa is Italian, and he just loved Frank Sinatra. At a certain point, I became obsessed with my parents’ Christmas album because it had jazz on it. One of the songs was Nancy Wilson singing ‘The Things We Did Last Summer’. There was also an Ella song on it.”

Cavassa moved to the San Francisco area to attend college at San Francisco State, and that’s when, “I really got into jazz. I didn’t like studying voice, but I got into jazz history.” She started going to live jazz performances and collecting records. “I bought a lot of records and would learn things off the records. And, I would sit in at a club called the Club Deluxe. I learned through trial and error.”

On a vacation trip to New Orleans, Cavassa was “so amazed by the concentration of music, coming from everywhere”, and, in 2017, she moved there, quickly acclimating herself to the local music scene. She toured with Adonis Rose and the New Orleans Jazz Orchestra and trumpeter Irvin Mayfield and met drummer/singer Jamison Ross, who co-produced her album. She also met legendary New Orleans vocalist, 80-year-old Germaine Bazzle, “who had an amazing influence on me.” Bazzle’s song, “To You My Love”, is included on the album as a tribute to her.

Cavassa is collaborating with keyboardist Ryan Hanseler on another album, with strings. There will be some original music and at least one standard, Cole Porter’s “So in Love”. The album, she said, “is a product of Covid. We were neighbors and quarantined.”

The Sassy Awards will return to their normal November date later this year, so Cavassa will be coming to New Jersey to present them as one of the most recent winners. And, she’s hoping to book some dates in the Northeast. WBGO’s Gary Walker, one of the Sassy judges, considers Cavassa “a producer’s dream. She has a truly original approach to the music, which is quite refreshing and much needed.”

To say that Tawanda Seussbrich-Joaquim was surprised by her selection as a co-winner of the Sassy Award would be an understatement. “I have the least experience of anyone,” she said, adding that, “I feel great. I feel wonderful. It’s a wonderful blessing to be part of this.”

Seussbrich-Joaquim (right photo above) grew up in a musical family, but the music wasn’t jazz. Her mother is from Germany and favored classical music with a little folk music mixed in. Her father is from Mozambique, and he introduced her to world music. In elementary school in Las Cruces, NM, she was part of the choir — “We did do a version of ‘Blue Skies’”. She was also active in stage plays and musicals as she progressed to middle and high school. Her favorite role was playing Crystal in a school production of Little Shop of Horrors. WBGO’s Walker recognized her theatrical talents. “Tawanda uses her vocal skills with an acting background,” he said. “That makes her singing a story, something to build on.”

The discovery of jazz “happened gradually” after she began attending college at the Santa Fe University of Art & Design, majoring in Contemporary Music. And, she met Mirabai Daniels, her vocal instructor in college who happens to be married to jazz clarinetist Eddie Daniels. “From the start, she would get me out of my comfort zone. She pointed out that you can embellish classical songs and show tunes, but they don’t give you the liberty to tell them as you. She encouraged different things out of me — that I can sing something different that isn’t on the stage.”

Daniels considers Seussbrich-Joaquim “a natural. Despite being relatively new to jazz,” she said, “she is developing her own style, with an authenticity to her story singing, a strong and flexible voice, and a courageous approach to improvisation. Her ear is good, she continues to study and listen and learn, and she brings a positive attitude to her music making. And,” Daniels added, “Tawanda is a delight to work with, which should bless her with a long and successful career as a jazz vocal musician.”

For the Sarah Vaughan competition, Seussbrich-Joaquim chose a 1920s blues song, “Tain’t Nobody’s Business If I Do” written by Porter Grainger and Everett Robbins as one of her selections. “I really resonated with the message,” she said. “It’s very repetitive and bluesy. I decided this could be the ‘Sassy’ song. One of the parts I really love is, ‘If I go to church on Sunday, then just sing the shimmy down on Monday, Tain’t Nobody’s Bizness if I do.’ It’s saying, ‘I am a woman in my own right. It really doesn’t matter what anybody else thinks.’ Music really is therapy for us. We resonate with the songs to learn some things about our own specific journey.” Early recordings of the song were made by Anna Meyers and the Original Memphis Five, Bessie Smith, and Alberta Hunter. Blues singer Jimmy Witherspoon had a hit with it in 1947, and Billie Holiday recorded it in 1949.

Seussbrich-Joaquim moved to Los Angeles last year and has been performing at Campus Jax, a bar and grill in Newport Beach. Some of her other favorite songs — the 1931 Gerald Marks/Seymour Simons standard, “All of Me”, and “The Peacocks”, a tune written by pianist Jimmy Rowles for a 1977 Columbia album of the same name which featured Rowles and tenor saxophonist Stan Getz. British vocalist Norma Winstone later added lyrics to it. Singing “All of Me”, Seussbrich-Joaquim said, is a tribute to Sarah Vaughan. “Her style and voice and contribution to jazz are really the foundation of my jazz education and love for jazz.

“ ‘The Peacocks’ is one of my favorite ballads to sing,” she continued. “Mirabai showed that to me. It really feels like a painting to me. Every different word and every note is so chromatic. I feel like I’m painting an elaborate Monet. I love finding songs that you have to feel and hear what it’s trying to say.”

Ella Fitzgerald and Billie Holiday, along with Vaughan, are Tawanda’s primary influences, but she recently became aware of Anita O’Day. “Every day I’m finding a new artist,” she said. “Only last year, I discovered her. I really like the way she phrases. She uses the words to improvise. I love using the exact same words but in completely different ways. Each time you sing the same song, it shouldn’t be the same. I really resonate with learning how to tell a story, really feeling like a jazz vocalist.”

This month, she will be appearing at Resonance Records’ jazz festival in Newport Beach and at the Laguna Festival of the Arts in Laguna Beach. And, she is beginning work on a Resonance album that, hopefully, will be released early next year. It will include “some wonderful mature songs that show off the best of me. Some songs will sound more like show tunes. There will be a little funk, and some straight-ahead jazz.” — SANFORD JOSEPHSON”

According to DownBeat Magazine, Soul on Soul: The Life and Music of Mary Lou Williams by Tammy L. Kernodle (University of Illinois Press: September 2020) “serves as an essential text, working to set the record straight...

JALC on the Back Deck: Sherman Irby and Marcus Printup

**Complimentary July/August Jersey Jazz Content**This is one of two articles from the July 2021 issue of Jersey Jazz Magazine being made available to everyone. For complete access to all articles in our award... 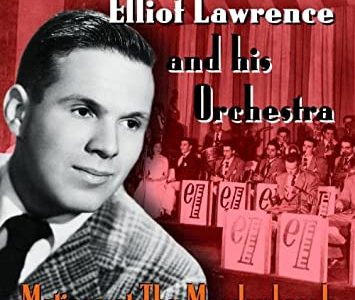 Although Best Known for Broadway and TV, Elliot Lawrence Got His Start Leading Big Bands

Elliot Lawrence, who died July 2, 2021 in New York at the age of 96, got his start as a big band leader before moving on to a prominent career on Broadway and in television. Excused from military service during World...